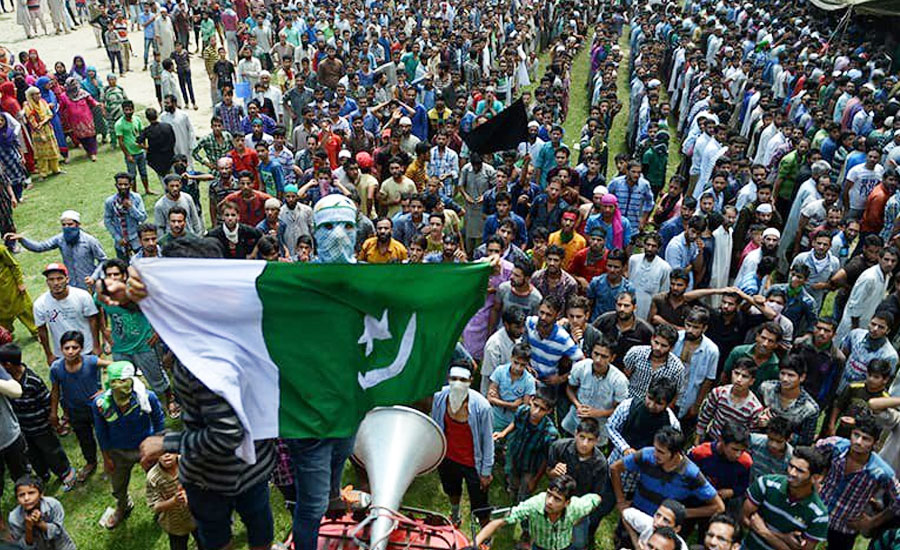 MUZAFFARABAD (92 News) – The Black Day is being observed in the Azad Jammu and Kashmir (AJK) against the move to revoke special status of Indian Occupied Kashmir (IoK) by Indian government. Prime Minister Raja Farooq Haider has said that neither Jammu and Kashmir is the part of India nor we accept the Indian constitution, announcing to observe Black Day against the worst move taken by BJP Modi-led government. He said that India had hatched a conspiracy to divide the Jammu and Kashmir state. “The Independence Movement in the Occupied Kashmir will more intensify in the coming days,” he said. The AJK prime minister said that Indian attempt of using the cluster bombs to divert attention from Kashmir will also fail. “We have information that India will open the border fence from any place and launch full propaganda against Pakistan,” he said. He said that India wants to show the world that intervention is going on from the border fence. “Our citizens and children were affected by Indian unprovoked firing along the Line of Control,” he said. AJK Prime Minister Raja Farooq Haider said that India is usurping the rights of the Kashmiris. “The fact-finding commission should visit Azad Jammu and Kashmir,” he said. He said that they want Kashmiris should be given the right to self-determination. “Today India has lost Kashmir in principle. Now India will not be able to dominate Kashmir for a long period,” he said. Raja Farooq Haider asked Prime Minister Imran Khan to approach the international community over the Kashmir issue. https://www.youtube.com/watch?v=p3X31T1Od4s On Monday, the Indian government rushed through a presidential decree to scrap a special status for Indian-held Jammu Kashmir, hours after imposing a major security clampdown in the region. Amit Shah has announced to abrogate Articles 370 and 35A from its constitution, which gives special status and rights to the people of occupied Jammu and Kashmir. The announcement was made by Indian Home Minister Amit Shah while addressing in Rajya Sabha, upper house of Indian parliament. Amit Shah also announced that Jammu and Kashmir would be re-organized geographically.