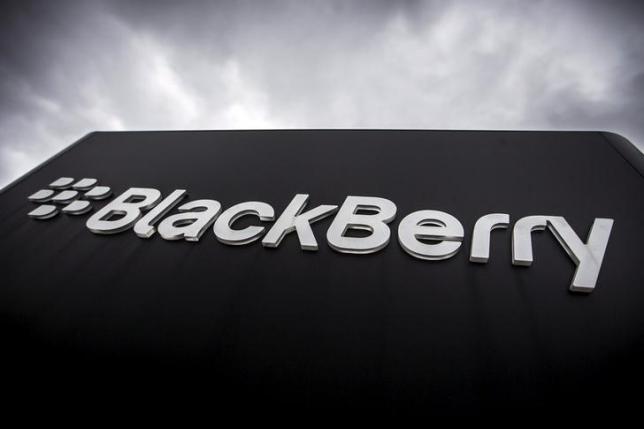 TORONTO - Smartphone maker BlackBerry Ltd reported weaker-than-expected quarterly results on Friday but forecast higher revenue and said it might replace its operating system with Google Inc's Android platform. The Waterloo, Ontario-based company, which is pursuing a turnaround plan based on selling more software, said it expected modest revenue growth in the remaining two quarters of this fiscal year, after nine quarters of falling sales, and a return to profitability in the fourth quarter. It also confirmed widely expected plans to launch an Android smartphone later this year. This marked a shift away from its own BlackBerry 10 platform that failed to regain market share ceded to Apple Inc's iPhone and a slew of Android-powered devices. "This phone is the answer for former BlackBerry users who miss the physical keyboard but also need apps," Chief Executive Officer John Chen said on a conference call. The company could jettison its own platform if the Android device gains acceptance with its core base of government and financial industry clients, Chen added. BlackBerry shares, which fell as much as 8 percent before the morning bell, were down 2.7 percent at $6.84 in morning Nasdaq trading. "What they said on the call, speaking more about the outlook as opposed to the results itself, painted a less bleak picture," said Cormark analyst Richard Tse. EYE ON SOFTWARE SALES BlackBerry, whose smartphone market share has dwindled, said earlier this month that it would buy rival mobile software maker Good Technology for $425 million. It expects the deal to help win new clients for its services business, a priority as it shifts its focus to device management software for enterprise customers. Still, analysts noted revenue growth from the software arm was weak. "I'm happy to give them credit for patent licensing, but that's not what we're talking about in terms of high-value recurring revenue," said CIBC analyst Todd Coupland. Excluding restructuring charges, a non-cash credit tied to the value of debentures and other one-time items, the company reported a loss of 13 cents a share for the second quarter ended on Aug. 29. On that basis, analysts polled by Thomson Reuters I/B/E/S had, on average, forecast a loss of 9 cents. Revenue fell 46.5 percent to $490 million, well below the analysts' average estimate of $610.6 million. Net income was $51 million, compared with $68 million in the prior quarter and a year-earlier loss of $207 million. -Reuters