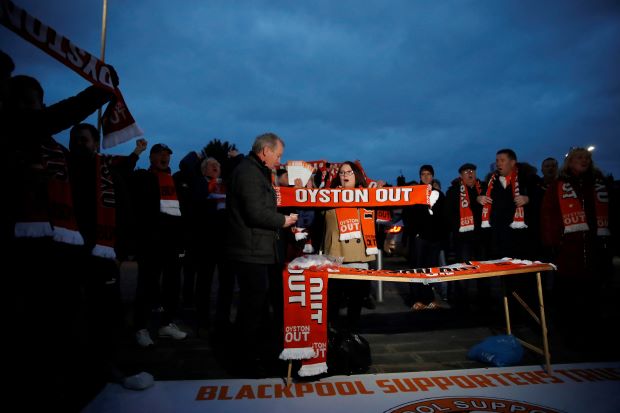 LONDON (Reuters) - Arsenal’s team bus was briefly delayed on the way to their 3-0 FA Cup third round win at Blackpool after a home fan climbed onto its roof in protest at the Lancashire seaside club’s owners. The fan was photographed sitting on top of the coach at Arsenal’s team hotel shortly before the London side were to depart for the 1730 GMT kickoff at Bloomfield Road. Supporters of third-tier Blackpool have regularly protested against club owner Owen Oyston and many are boycotting home games with gates averaging only 4,129 at their 17,000-seater ground which hosted Premier League football in 2010-11. Lancashire Police told the BBC that the protest lasted about 40 minutes before the man was persuaded to come down and was arrested “on suspicion of an offence under the Trade Union Act”. The Arsenal team arrived in good time for kickoff and fears of more protests proved unfounded as the London club cruised to victory with teenager Joe Willock scoring twice and Alex Iwobi once. What could have been a tough assignment for Arsenal against a side who caused a scare in their League Cup clash earlier this season ended up being a comfortable outing with a sparse home crowd outsung by the Arsenal following. The 19-year-old Willock became the youngest Arsenal player to score in an FA Cup tie since Aaron Ramsey in 2010. His day could have been even better but a linesman’s flag ruled out a hat-trick goal. “It’s a brilliant day for me on a personal note but I’m proud of how we did as a team as well. I don’t think the scoreline reflects how well we played,” he said. “The linesman crushed my dreams with the hat-trick but that’s football and hopefully I can get another opportunity soon. Hopefully the boss keeps believing in me.”