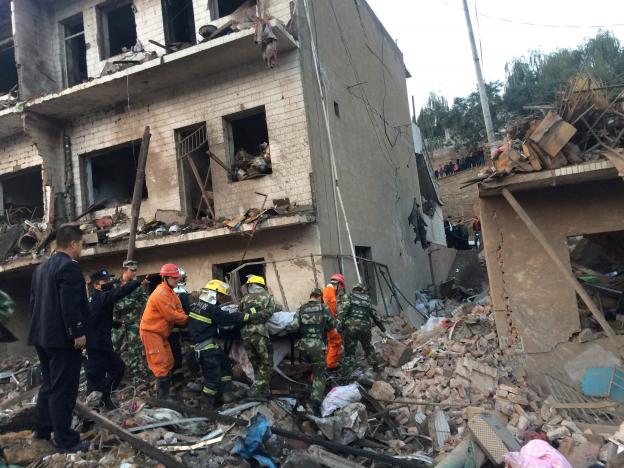 BEIJING – A powerful blast at a prefabricated house in northwestern China on Monday killed at least 14 people and injured 147, state news agency Xinhua said. The explosion occurred in the early afternoon in the town of Xinmin in Shaanxi province, damaging dozens of buildings including the local hospital, Xinhua said. An initial police investigation indicated that the blast was caused by illegally stored explosives, Xinhua said, adding that authorities had detained the owner of the building and were searching for the tenant. Eleven of the injured were in intensive care. Pictures carried by state media showed rescuers digging through the rubble of low rise buildings, though searches for the incident on Chinese social media were blocked on Tuesday. China has a bad safety record, with previous blasts blamed on poorly stored chemicals or industrial explosives which are easy to get hold of due to their use in China's booming coal mining sector. A series of powerful explosions last year at a chemicals warehouse in the northern city of Tianjin killed 165. There have also been cases of people deliberately setting off blasts to settle local grievances such as land disputes.  –Reuters