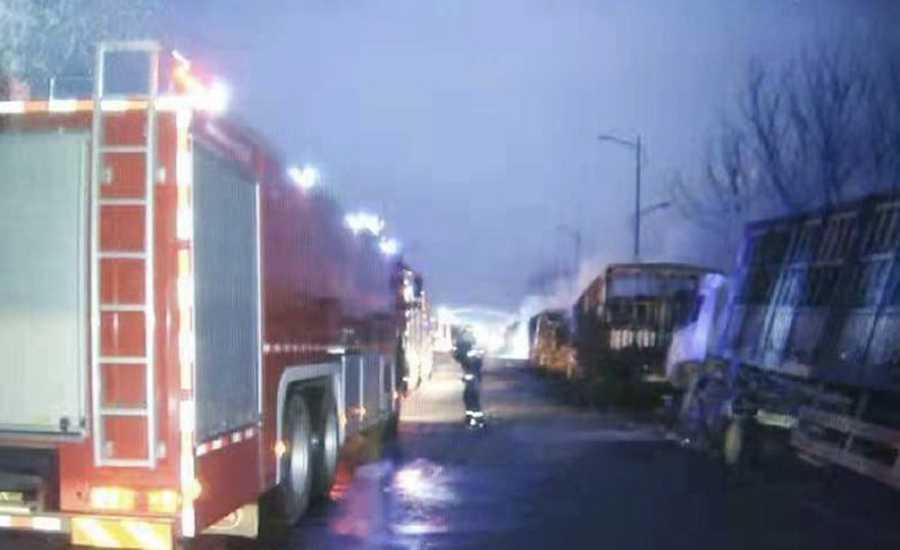 BEIJING (Reuters) - A blast near a chemical plant in Zhangjiakou city in China’s northern Hebei province early on Wednesday killed 22 people and injured at least 22 others, the local government said. A video of the blast scene shared by state media showed billowing black smoke and flames, while photographs showed rows of burnt-out cars and trucks lining the streets on Wednesday morning. The fire engulfed 50 vehicles, the official Xinhua news agency reported, citing sources from government. Production at the nearby Hebei Shenghua Chemical Industry Co was shut down, said a woman who answered the plant’s telephone. A spokesman at ChemChina, owner of Hebei Shenghua, confirmed that the blast did not occur at Shenghua. State media said all fires at the blast site had been extinguished. Zhangjiakou, a city about 156 km (96 miles) northwest of Beijing, is set to host the 2022 Winter Olympics alongside the capital. Public anger over safety standards has grown in China after three decades of swift economic growth has been marred by incidents ranging from mining disasters to factory fires. In August 2015, 165 people were killed after a chemical warehouse explosion in the port city of Tianjin. A government report found that the disaster was cause by improperly or illegally stored hazardous materials. China has vowed to improve industrial standards, but environmentalists say they fear oversight weaknesses persist, including an opaque production process for hazardous chemicals.