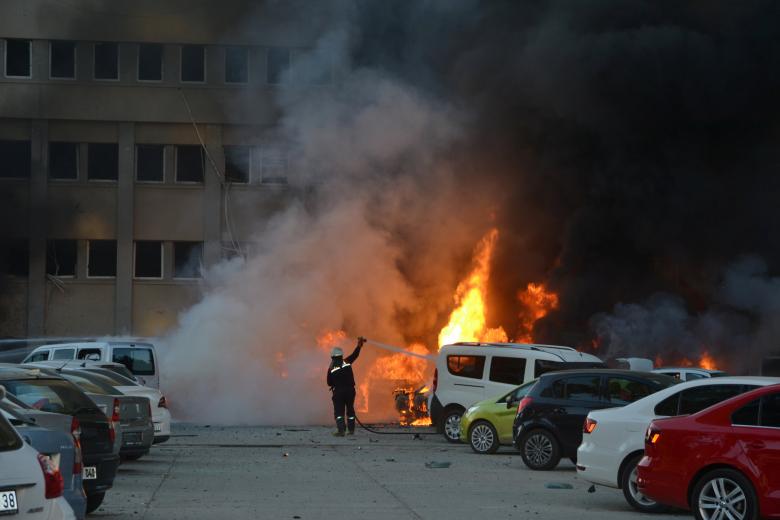 ISTANBUL - An explosion killed two people and wounded more than a dozen outside the governor's office in the southern Turkish city of Adana on Thursday, state media said, weeks after the United States warned extremist groups were planning attacks. Video footage showed a vehicle ablaze in the car park outside the building and thick black smoke rising into the sky in the city, 40 km (25 miles) from Turkey's Mediterranean coast. Windows were blown out and parts of the facade of the building, roughly six floors high, were torn off. Adana is about 10 miles (16 km) from Incirlik Air Base, which the US military uses to launch attacks against Islamic State militants in Syria. Families of US military personnel were ordered to leave Adana and some other parts of Turkey in March over security concerns. "Damned terror continues to target our people. We will fight with this terror to the end in the name of humanity," Turkish EU Affairs Minister Omer Celik wrote on Twitter, saying he had spoken to the Adana governor. There was no immediate claim of responsibility. Kurdish PKK, Islamic State and leftist militants have all carried out bomb attacks in Turkey in recent years. The state-run Anadolu agency quoted provincial governor Mahmut Demirtas as saying two people were killed and 16 wounded. Anadolu said the blast, which occurred shortly after 8 a.m. (0500 GMT), came from a vehicle in front of the building. The US Consulate General in Adana warned three weeks ago that extremist groups "continue aggressive efforts to attack US citizens and other foreigners in Adana". The State Department has warned US citizens to avoid travel to southeastern Turkey. -Reuters