Blast in Parachinar kills 24, injures over 70

Blast in Parachinar kills 24, injures over 70

PARACHINAR (92 News) – At least 24 people were killed and over 70 others wounded when a powerful explosion rocked Parachinar's local market on Friday.

The deceased include women and children. The blast occurred near the gate of an Imambargah. As many as 15 shops and several vehicles were also damaged in the blast.

The injured were shifted to the hospitals, while emergency has been declared in all hospitals of the city. 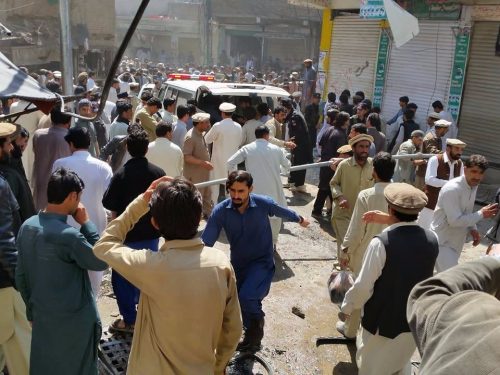 Security forces have cordoned off the area.

The Kurram Agency district is a remote tribal area south of Peshawar.

There was no immediate claim of responsibility but the blast, which took place as people gathered for Friday prayers near the women's entrance of a Shia mosque in the central bazaar, follows a series of attacks this year.

Sharif condemned the attack and said the government would keep up efforts to "eliminate the menace of terrorism".

In a statement, he said: "The network of terrorists has already been broken and it is our national duty to continue this war until the complete annihilation of the scourge of terrorism from our soil."

On January 21, some 25 people were killed and more than 65 injured when a blast occurred at a marketplace in Parachinar.