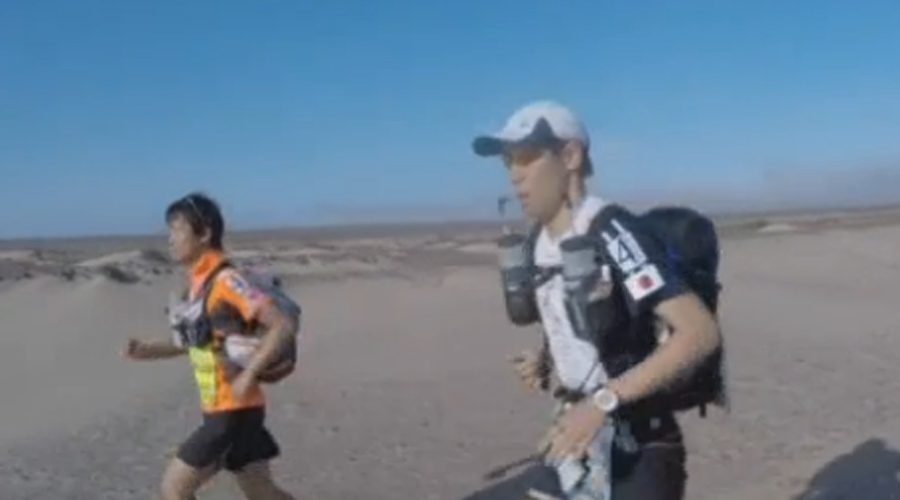 NAMIBIA – Running an ultra marathon in the scorching desert is daunting enough for most athletes. Doing it blind is practically impossible. But not for Simon Wheatcroft, seen here in May taking part in a 150-mile ultra marathon in the Namibian desert. Blind since the age of 17, he usually has a running partner. But ahead of the desert race, Simon teamed up with IBM to develop a smartphone app to help him run the marathon on his own. Simon Wheatcroft, a blind athlete, says: "To run in the right direction all you need is a bearing, so it may be 40 degrees north that you need to run for a certain amount of time. So we created an app that would notify me if I deviated from the desired bearing." This is Simon's guide dog Ascot. And this is the app he co-developed - appropriately named 'eAscot'. Tim Daniel Jacobi, IBM Software Engineer, says: "The major challenge was, we're trying to build something that is a mix between a GPS tracker and something that helps you park in your car. So we kind of needed to come up with the math to detect how far you are off the track and to think about how often we need to do that and how quickly does the app need to respond. "Like parking sensors, beeps tell him when he's veering off course. The pitch of the beep also changes if he's too far left or too far right. Out in the desert, you're less likely to bump into a fellow runner. But Simon and IBM are now working on a system that could help him run unassisted in city marathons. The blind athlete says: "The key improvement is to definitely take it to the city marathon. So the app for the desert used GPS as the navigation system. So now can we create a system which can identify the objects and then translate that information to me. That's what we're working on now, some kind of sensor detection system that uses haptic to vibrate different parts of my body." He managed about 100 miles of this years Namibian race, before injury forced him to retire. He's now firmly set his sights on returning next year, with the new improved eAscot guiding the way. –Reuters