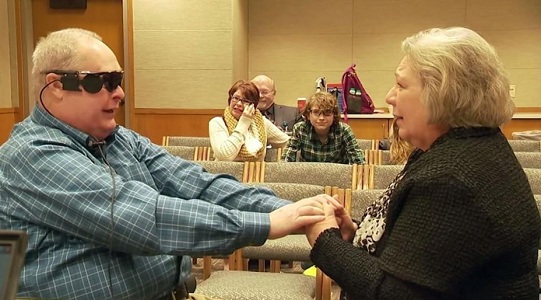 ROCHESTER, MINNESOTA (Reuters) - A blind man taking part in a clinical trial at the Mayo Clinic in the U.S. had his wish come true when he ''saw'' his wife for the first time in more than 10 years. Allen Zderad has been fitted with Argus II Second Sight bionic eye system that sends a processed video signal directly to his optic nerve allowing his brain to perceive simple images. It's a moment Allen and Carmen Zderad will never forget.. Allen can "see" his wife - something he hasn't been able to do for more than ten years due to a degenerative eye disease called retinitus pigmintosa. Allen is one of the first people in the United States fitted with an Argus II -- a bionic eye system that restores partial vision to the blind. "Mr. Zderad is experiencing what we call artificial vision. It's not like any form of vision that he's had before. He's receiving pulses of electrical signal that are going on to his retina and those are producing small flashes of light called electro-phosphenes. These small flashes of light are sort of like the points of light on a scoreboard at a baseball game,’ said Dr. Raymond Iezzi of the Mayo Clinic. Those points of light allow Allen to see things like the frame of a door and the handle of a refrigerator as well as sense how many people are standing in front him. This is how the device works: Allen is wearing a pair of glasses fitted with a camera which sends its video signal to a wearable computer that processes and formats it. That data is then wirelessly sent to a grid of 60 electrodes that have been surgically implanted into Allen's eye. The visual information activates the implant to send a series of impulses to the retina which are interpreted as vision by the brain. Right now, the device is only cleared for patients with retinitus pigmintosa. Dr. Iezza hopes that in the near future the system could be used to help people with severe glaucoma and blindness due to diabetes. "If we could extend the reach of this technology to care for those patients, I think we would really see a true maturation and that would require that we bypass the eyes altogether and go directly into the brain with this kind of technology. I think I -- I think we're going to see that happen in our lifetime,’ Dr. Iezza added. For now Allen Zderad is content. His wife's face may only be a simple image, but for this once blind man, it's a sight for sore eyes.