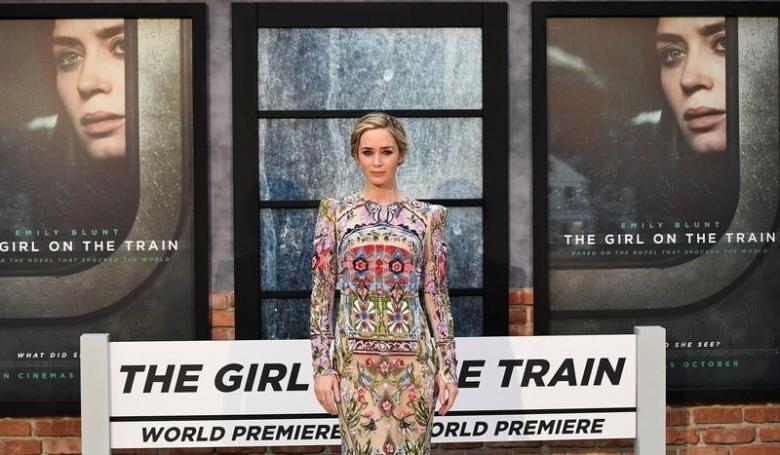 LONDON - Happily married with two young children, actress Emily Blunt relished the opportunity to play a divorced, alcoholic, damaged protagonist in her latest thriller, "The Girl on the Train." Blunt, married to actor John Krasinski and known for embracing comedy in "The Devil Wears Prada," "The Five-Year Engagement" and "Into the Woods" told Reuters that she wanted the challenge of portraying something darker. "It's just to do something else and something incredibly damaged and unsettling," the actress said on the train track-themed carpet at the film's London premiere on Tuesday. In "The Girl on the Train," based on Paula Hawkins' novel of the same name and out in theaters on Oct. 7, Blunt plays Rachel Watson, a lonely woman devastated by divorce and battling alcohol addiction. Infatuated by the seemingly perfect couple (Luke Evans and Haley Bennett) she sees from her daily commuter train that runs past their house, Rachel sees something shocking one day and becomes enraged. Driven by intrigue, passion and suspense, Rachel has a chance to engage in the lives she has only watched from afar, but the lengths she goes to uncover the truth could lead her to a dangerous situation. "It's a story full of broken people suffering with their own demons and addictions and betrayal and loss and love," Evans said. Director Tate Taylor, best known for 2011's "The Help," said he was drawn to the exploration of "humanity and the human condition at its worst," and wanted to portray an accurate representation of addiction. "I felt like I had a duty to represent (addiction) properly for all those affected by it," he said. -Reuters