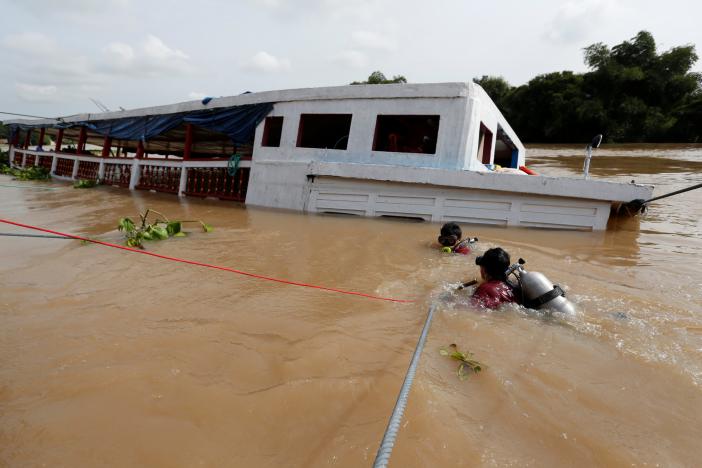 BANGKOK - An overcrowded tourist boat carrying Muslim pilgrims was being piloted recklessly before it capsized, killing at least 15 Thai people, officials said on Monday as divers and other rescuers searched for 11 people still missing. The accident happened on Sunday on the Chao Phraya River in Ayutthaya, a UNESCO World Heritage site located some 80 km (50 miles) north of the Thai capital of Bangkok. The double-decker tourist boat carrying around 100 Thai Muslims on a pilgrimage tried to overtake a sand barge and ran into a barrier, police said, causing the boat to capsize. Eleven people are still missing and police divers resumed their search early on Monday. No foreigners were believed to be among the dead. The boat was 50 passengers over its capacity at the time of the accident, police commander Surapong Thampitak told Reuters on Monday. The boat's driver will be charged with reckless driving causing loss of life and overloading the boat beyond its safety limit, said Surapong. The driver was detained on Sunday night and was being questioned by police, he said. "We are searching for around 11 missing people today," Ayutthaya Deputy Governor Rewat Prasong told reporters. The accident came as Thailand expects to welcome a record 33 million visitors this year. Road and boat accidents involving tourists are common in Thailand, where safety standards are sometimes well below international norms. However, accidents barely make a dent on Thailand's tourism industry, one of the few bright spots in an otherwise lacklustre economy. A series of bomb blasts in southern Thailand have also had little impact. One of those attacks on Aug. 11-12 killed four Thais and wounded dozens, including foreigners. Police have blamed the bombings on Malay Muslim insurgents operating in Thailand's far south. -Reuters