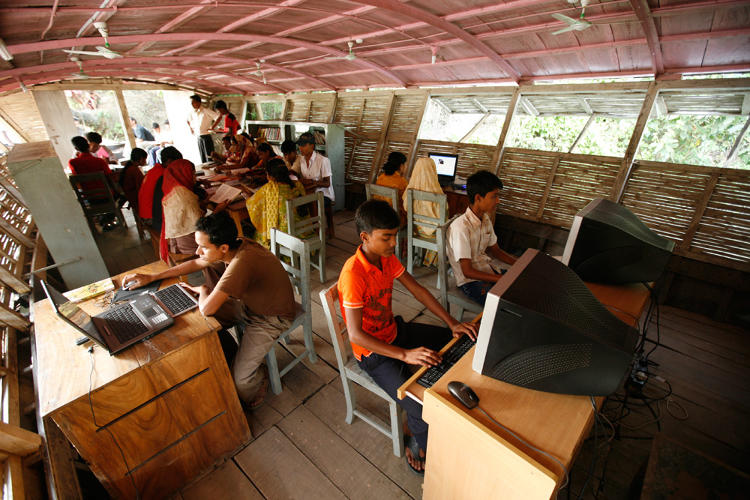 DHAKA - Anna Akter, a nine-year-old student at a floating school in Bangladesh's remote Natore district, says she might have missed out on her education during annual monsoon floods without her boat-based classroom. The same goes for Khushi Khatun, who also studies at the boat school where she gets free tuition and materials. “Had there been no such school, she would have had to walk two kilometers along a muddy path or take a boat journey during monsoon which may have discouraged her to study,” said her father Nazir Uddin, a farmer in Pangasia village. Hundreds of students in the northern Bangladesh district are taught in floating schools, an initiative to make education available to children whose lives are complicated by regular flooding. “Instead of the students going to school, the school reaches them,” said Mohammed Rezwan, founder of Shidhulai Swanirvar Sangstha, the non-profit organization that introduced the country’s first floating school system. It also trains farmers to grow vegetables in floating gardens and raise ducks and fish, as well as offering free farm inputs. The boat schools are the kind of measure that can help education in developing nations like Bangladesh become more resilient to extreme weather and worsening climate impacts. Governments meeting in Japan from March 14-18 to adopt a new action plan to reduce the risk of disasters are expected to call for better ways to protect education before, during and after crises. FROM BUS TO CLASS Rezwan, an architect, was born and brought up in Natore district. He was lucky as he didn’t miss school in the rainy season thanks to his family’s boat, unlike many of his friends. “From school age, I thought there must be a solution to this problem,” Rezwan told the Thomson Reuters Foundation by telephone from his office in Natore. While at university, it occurred to him that if children couldn’t make it to school, their classroom should go to them. Rezwan established Shidhulai Swanirvar Sangstha in 1998 with $500 from his savings and scholarship money, and the floating school concept was launched in 2002. The boats first serve as school bus, collecting children from different riverside stops. Once they have docked, class begins. Rezwan’s organization now has 22 wooden boats, each able to accommodate 30 students. The boats have a classroom, a library and internet-connected computers powered by onboard solar panels. Each year, much of the Bangladesh countryside is hit by flooding, forcing schools to close, Rezwan said. In 2007, for example, some 1.5 million students were estimated to have been affected by floods, he noted. Around two thirds of the country’s 160 million people live in rural areas. During a normal rainy season, over a fifth of the country’s land is submerged, while in extreme years, up to two thirds can be inundated. As climate change impacts become visible, disasters caused by extreme weather, including floods and storms, are increasingly hitting the low-lying nation, Rezwan said. Sea-level rise could exacerbate the situation in coastal areas in the coming years, the Intergovernmental Panel on Climate Change has predicted. IDEA SPREADS The floating schools cover an area of 2 square km, offering primary level education to local children who might otherwise have stayed away from school. Shidhulai Swanirvar Sangstha now also trains adult villagers on children’s and women’s rights, nutrition, health and hygiene, and how to farm ducks and fish alongside vegetables in “floating gardens”, helping them adapt to the impacts of climate change. Some other flood-prone countries, including Cambodia, Nigeria, the Philippines, Vietnam and Zambia, have introduced floating schools, following Rezwan’s model. Nazma Khatun, a teacher at the Natore boat school, said the nearest government primary school, located some 2 km away, could not be reached by students from her area during seasonal flooding. “The floating school has brought many benefits,” she said. “The students can easily go to school and stay close to their parents. The literacy rate is growing here,” she added. Her daughter also attended the floating school and is now studying at secondary level nearby. It has changed Khatun’s life for the better, too. “After I got married, I stayed at home as a housewife,” she said. “Now I am teaching in this school alongside pursuing my graduate studies.” - Reuters