Musician Bob Dylan turns 75, with latest tour and album in the wind 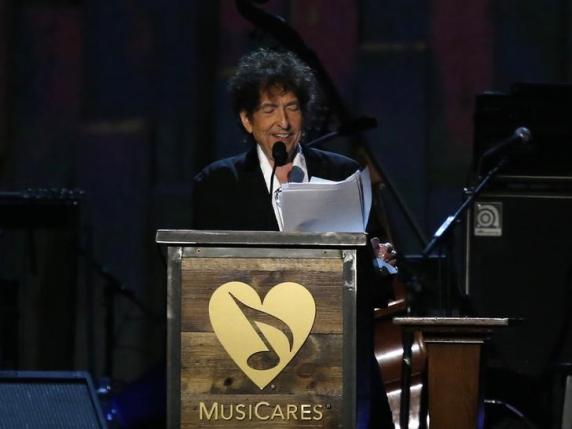 Musician Bob Dylan turns 75, with latest tour and album in the wind

LOS ANGELES – Rock bard Bob Dylan, forever young in the minds of baby boomers who grew up with his music, turned 75 years old on Tuesday, a little more than a week before the start of a U.S. summer tour in support of his latest album. The biggest public event marking his arrival at the three-quarter-century mark was a two-night "Dylan Fest 75" benefit concert on Monday and Tuesday in Nashville, Tennessee. It featured performances by artists such as Emmylou Harris, Kesha, Boz Scaggs and Ann Wilson. Kesha also paid tribute to Dylan at the Billboard Music Awards on Sunday night in Las Vegas with a stirring cover of his 1964 ballad "It Ain't Me, Babe." Dylan himself kept a characteristically low profile. A spokesman would say only that the veteran singer-songwriter planned to pass the day privately. Still, there was no sign that Dylan's rendezvous with the big 7-5 was slowing down the performer, whose music gave voice to an era of youthful revolt during the 1960s and has transformed the sound and depth of popular music for more than half a century. His latest studio set, "Fallen Angels," the 37th studio album of his career, was released last Friday, a follow-up to his 2015 collection of Frank Sinatra songs. Pausing after a series of shows in Japan in April, Dylan was scheduled to launch a two-month U.S. summer tour on June 4 with a performance at the Chateau Ste. Michelle Winery in Woodinville, Washington. R&B-gospel singer Mavis Staples is slated to open for Dylan on all 30 dates of the trek, which is slated to wind across the country before wrapping up on July 17 in Gilford, New Hampshire. In October, Dylan is on the bill with the Rolling Stones for the first of three nights of concerts in Indio, California, featuring fellow rock icons Paul McCartney, Neil Young, Roger Waters and the Who. Dylan has toured nearly endlessly since 1988, remaining true to the credo he expressed in "Forever Young," a hit track from his 1974 album, "Planet Waves." Or, as he sang in "My Back Pages" 10 years earlier, "Ah, but I was so much older then, I'm younger than that now." –Reuters