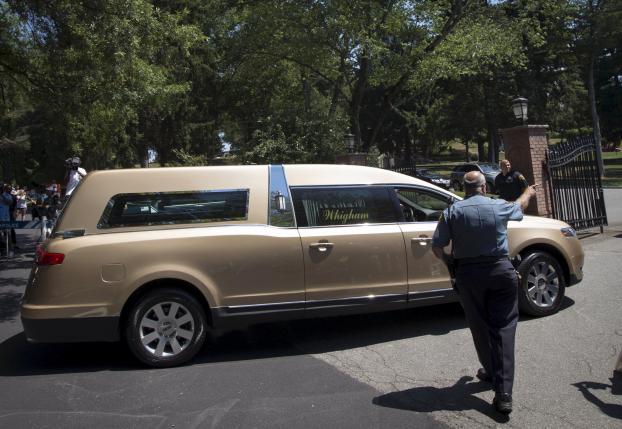 NEW JERSEY - Bobbi Kristina Brown was buried alongside her mother, Whitney Houston, on Monday, bringing to a close the brief and tragic life of the only child of the singing legend. About a dozen fans came out to the cemetery in Westfield, New Jersey, to pay their respects to Brown, 22, who died in Georgia last week six months after being found face down and unconscious in a bathtub at her home. Holding pictures of Brown and Houston, who was born in New Jersey, fans crammed against police barricades as a gold-colored hearse passed through the gates of the cemetery where the "I Will Always Love You" singer was buried three years ago. Brown, the daughter of Houston and R&B singer Bobby Brown, died after suffering irreversible brain damage in a still unexplained January incident at her Roswell, Georgia, home. She was found unresponsive in a bathtub by her boyfriend, Nick Gordon, and a friend in an eerie echo of her mother's death. Whitney Houston, who had a long history of drug abuse, drowned in a bathtub at a Beverly Hills hotel in 2012 at age 48. The burial ceremony was for friends and family only and fans and the media were barred from the graveside. Michael Tarashuk, 21, missed work at a New Jersey summer camp to pay his respects on Monday. "I wanted to show support to the Houston family and for Whitney Houston," he said. "I was here three years ago for Whitney Houston." Kevin Frazier, a host of celebrity TV show "Entertainment Tonight" and a friend of the Houston family, was among those invited. "This wasn't a celebrity funeral. This was a little girl and they (the family) can't understand why we're back here so soon," he said. "It was sad, it was heartbreaking, nothing like anybody should ever experience." One fan, Lakedia Cherry, 43, collapsed in the heat. "I have three daughters around the same age as Bobbi Kristina. That could have been any one of my daughters. We feel like we are part of the family," Cherry said before collapsing. Dozens of onlookers also turned out for Brown's private funeral service in Alpharetta, Georgia, on Saturday. No criminal charges have been filed over her death but in June her court-appointed conservator filed a $10 million civil lawsuit accusing Gordon of causing "life-threatening injuries" and stealing from her bank account while she was in a coma. - REUTERS