Bodies of 21 women, one man found on migrant boat in Mediterranean: MSF 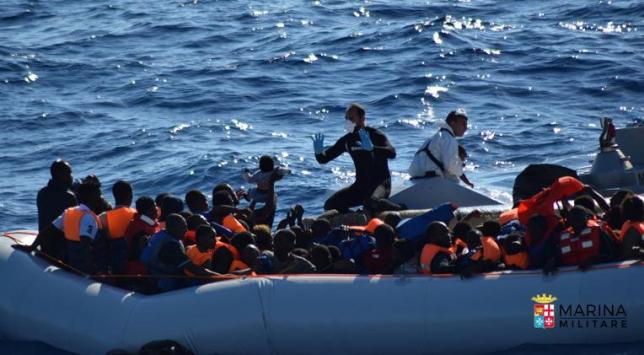 Bodies of 21 women, one man found on migrant boat in Mediterranean: MSF

ROME - The bodies of 21 women and one man were found on a rubber dinghy adrift near the Libyan coast, just hours after they had set sail for Italy, humanitarian group Medecins Sans Frontieres (MSF) said. An MSF ship patrolling the central Mediterranean came to the rescue of two dinghies that were sailing close together and managed to pull 209 people, including 50 children, to safety. However, 22 migrants were found dead at the bottom of the first dinghy, lying in a pool of fuel. "It is still not entirely clear what happened, but they died a horrible death. It is tragic," said Jens Pagotto, MSF Head of Mission for Search and Rescue Operations. "It seems that water and fuel mixed together and the fumes from this might have been enough for them to lose consciousness," he told Reuters by telephone. The survivors, most of them from West African states such as Nigeria and Guinea, were being brought to Sicily along with the dead and were due to reach the port of Trapani on Friday. Italian authorities have reported a jump in the number of migrants who have left Libya this week on overcrowded boats in search of a better life in Europe, as people smugglers take advantage of calm seas and hot summer weather. More than 2,500 people were rescued on Tuesday and one body was recovered, Italy's coast guard said. Almost 600 people were saved on Wednesday. As of Monday, 79,861 migrants had arrived in Italy by sea so far in 2016 compared with 83,119 during the same period last year. Almost 3,000 migrants have died or gone missing in the Mediterranean in the first seven months of this year, according to the International Organization for Migration. Pagotto said the two dinghies had probably left the north African state of Libya in the early hours of Wednesday and were picked up some 17 nautical miles east of Tripoli. The Italian coastguard received a distress call at about 10 a.m. (0800 GMT) and notified the MSF ship MV Aquarius, which took three hours to reach the scene. An Italian naval vessel also helped with the rescue. "The survivors had been on the boat with the bodies of these women for hours on end. Many are too traumatized from what they have endured to be able to talk about what had happened," said Pagotto. He said a team of trauma specialists would be on hand to help the survivors when they reached land. -Reuters