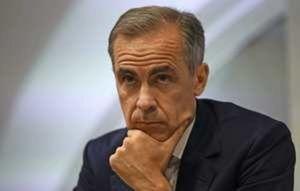 LONDON - Long-term prospects are positive for the UK economy and it is performing as the Bank of England had expected when it introduced stimulus measures in August to cushion the economic shock from the June Brexit vote, Governor Mark Carney said in an interview with Herald Scotland. "We had expected in August that the economy would slow materially during the second half of this year, relative to relatively strong growth in the first half of this year. Broad brush, that is what we are seeing," Carney said in the interview to be published in the newspaper on Wednesday. "There are positive long-term prospects for the UK economy. It is a product of a period of uncertainty and adjustment that naturally is under way. It is a slowing from strong growth to something less than that," he added. Commenting on the impact on the economy from the heightened constitutional debate in Scotland in the wake of the Brexit vote, Carney said that people across regions and sectors are coming to terms with the potential changing nature of Britain's relationship with Europe and the challenges that brings. "That is the principal uncertainty people are addressing. It is still early days in that adjustment." Last month, the BoE cut interest rates by 25 basis points to a record-low 0.25 percent. The cut was accompanied by a pledge to buy 60 billion pounds ($78 billion) of government bonds with newly created money over the next six months, and two new stimulus schemes. At the time, Carney said he had unveiled an "exceptional package of measures" because the economic outlook had changed markedly following the Brexit vote. The Bank expected the economy to stagnate for the rest of 2016 and suffer weak growth next year. August's stimulus was Britain's largest since the 2008 global financial crisis. But since then a string of indicators have rebounded from July's slump, leading some lawmakers to chide Carney for being alarmist about the Brexit vote. -Reuters