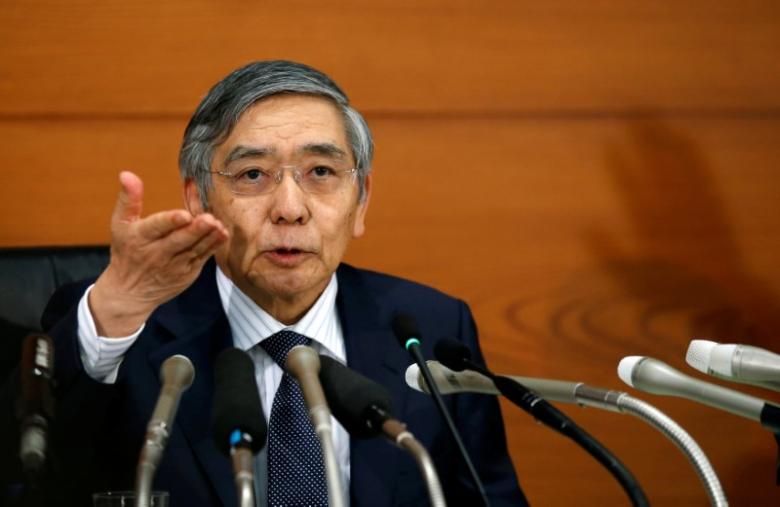 TOKYO - Bank of Japan Governor Haruhiko Kuroda said on Wednesday further yen declines may help the central bank achieve its 2 percent inflation target more quickly, even as geopolitical tensions lifted the Japanese currency to a five-month high against the dollar.

Kuroda reiterated that the BOJ was not targeting exchange rates in guiding monetary policy and instead was pumping money into the economy to spur inflation.

But he conceded the benefits a weak yen would have in accelerating inflation, such as by pushing up the cost of imports and thereby overall price growth.

As the economy continues to recover and the base effect from last year's oil price fall dissipates, inflation will accelerate and heighten public's inflation expectations, he said.

"Having said that, it's true that if the yen weakens, it may quicken achievement of our price target," Kuroda said.

The dollar languished at a five-month low versus the yen on Wednesday, as simmering geopolitical tensions checked risk appetite and put the safe-haven Japanese currency in favour.

Japan has been mired in deflation for nearly two decades as households sit on a pile of cash on uncertainty over the outlook.

The BOJ has deployed massive monetary stimulus since 2013 in the hope the public's perception of deflation will shift, with little success.

Core consumer prices rose 0.2 percent in February from a year earlier and analysts expect inflation to accelerate closer to 1 percent later this year due to a rebound in oil costs and rising import prices from last yen falls.

But major Japanese retailers have announced sweeping price cuts for food goods and daily necessities, underscoring the difficulty facing the central bank as it tries to spur inflation and coax consumers to boost spending.

The central bank will review its economic and price projections at its policy meeting on April 26-27.

The BOJ now projects core consumer inflation to hit 1.5 percent in the current fiscal year that ends in March 2018, and accelerate to 1.7 percent in fiscal 2018. That far exceeds private-sector projections of around 1 percent for both years.