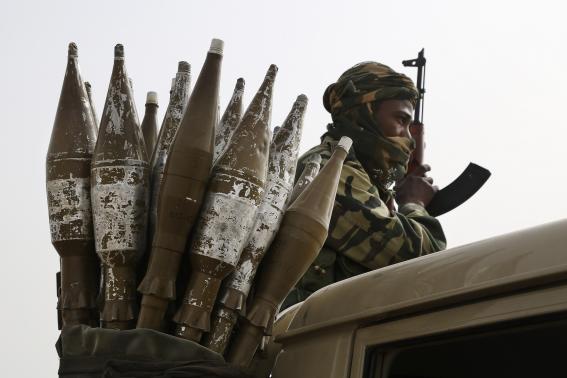 FOTOKOL, CAMEROON - Boko Haram is carrying out ethnic reprisals against Arabic speakers in northern Nigeria, accusing them of aiding Chad's army fighting against the Islamist group, military officers and residents say. Cameroonian military authorities say these attacks against Shuwa Arabs, an ethnic group speaking the form of Arabic common in Chad, have forced some 10,000 refugees from Nigeria across the border into Cameroon in recent weeks. Chad has deployed some 2,500 troops to Nigeria's border regions with Cameroon and Niger as part of a regional effort to tackle Boko Haram's six-year insurgency, which is threatening the stability of the impoverished region. Chad's battle-hardened troops have won a series of clashes, seizing towns and pushing back Boko Haram's fighters from the border region with Niger and Cameroon. But in border villages near Cameroon, Boko Haram militants have singled out many Shuwa Arabs for reprisals, a Cameroon military officer said. "Boko Haram has branched into a sort of massacre strategy against the Arab population that are suspected to be collaborators with the Chadian forces," Cameroon Special Forces Major Belthus Kwene told Reuters. Chadian Arabic, also known as Shuwa Arabic, is spoken by over a million people spread across southern Chad, northern Nigeria, Cameroon, Central Africa Republic and Sudan. Most of the refugees who settled in the Cameroonian villages of Amchoukouli, Wangara, Djabrari and Nigue were women and children. They said Boko Haram militants had massacred the men in their villages. "They killed 25 men," Fanne, a Nigerian refugee in Djabrari, told Reuters television. Boko Haram fighters forced the whole village to assemble before embarking on a killing spree, she added. "Nobody escaped. They shot some and slaughtered others with machetes and axes," she said. Boko Haram, whose translates roughly as 'Western Education is Forbidden', has killed thousands of people in a bloody campaign to carve out an Islamic caliphate in the north of Africa's largest oil producer. Fanne, like the hundred others who managed to escape the group's reprisals, sleeps under a tree with the few possessions and domestic animals she brought when she fled to Cameroon. Most refugees have declined to be moved further south to the main refugee camp in Minawao, already overcrowded with over 33,000 people. "These people are hoping that peace will return soon so that they can go back to their communities. They prefer to wait here," said Hayatou Oumarou, administrative head of the border town of Fotokol. - Reuters