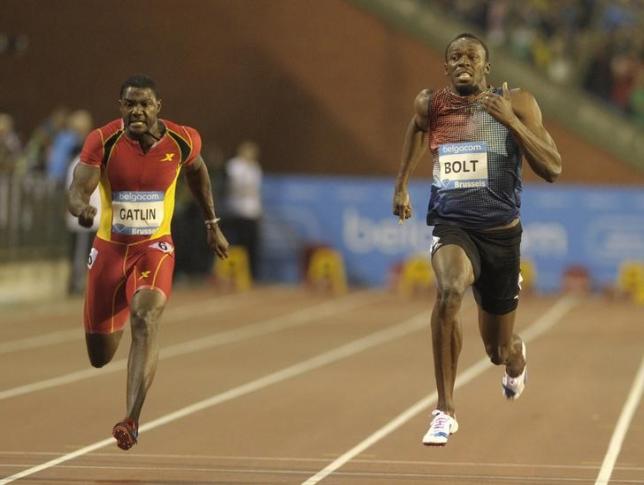 KINGSTON - Usain Bolt kicked off his campaign to win sprint honours at Beijing's World Championships later this year on Saturday and said he would be willing to face American rival Justin Gatlin at any time. Gatlin dominated 2014 with world leading and career best times of 9.77 and 19.68 seconds over the 100 and 200 metres respectively. Bolt missed most of last season with injuries and their potential showdown in Beijing is expected to be a highlight of the Aug. 22-30 championships. "I never have a problem competing as long as I know that I'm in great shape and I'm getting there," Bolt said after running a 200 metres race, his first over the distance in more than 18 months. "It's good to compete against the top people to see exactly where you are and what you need to work on, so for me I never back down from a challenge and as long as I'm not injured, I'm always ready to go, so we'll see what happens." Bolt's manager earlier this week seemed to downplay the possibility of a early meeting before Beijing with Gatlin, who has sparked outcries in Europe for running after serving two doping suspensions. "I don’t know where the other sprinters are running but I believe many meets would prefer not to invite athletes who bring negative headlines to their event," Ricky Simms said in an email to Reuters. Running in lane six, Bolt blazed off the corner at the UTECH Classic, before pushing to the finish line in 20.20 seconds. "I always try to run 19 anything, pretty much so I wasn't really pleased," said the 100m and 200m Olympic champion, who shook his head in disappointment. "But as I said, I didn't feel as smooth as I expected to feel but I haven't really been sprinting over the 200 over the last year so I just need to get back into race shape and I'll be fine." He now turns his attention to a 100m race in Rio on April 19 before the IAAF World Relays in the Bahamas May 2-3. He also has races planned for New York, Paris and Lausanne so far. - Reuters