Bolt stumbles to victory in 9.88 seconds 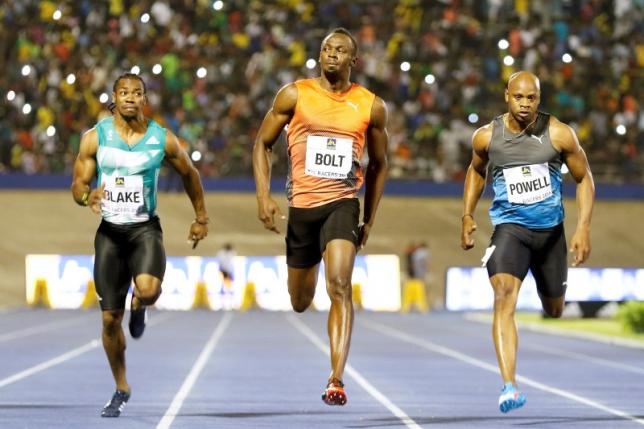 Bolt stumbles to victory in 9.88 seconds

KINGSTON - Olympic sprint champion Usain Bolt sounded a strong warning to his rivals for the Rio Games by winning the 100 metres at the Racers Grand Prix in Kingston in 9.88 seconds after recovering from a stumble. Bolt clocked the second fastest time of the year behind Frenchman Jimmy Vicaut's 9.86 and despite the bad start the six-time Olympic champion caught up with the strong field, which included Yohan Blake and Asafa Powell, at 60 meters with time to ease up in the last five meters. "I'm happy I got a season best. It was not a perfect race but I was able to win," Bolt said after the race. Nickel Ashmeade and Blake were second and third respectively in 9.94, while Powell finished fourth in 9.98 seconds. "I almost fall over... all I was trying to control it (start) but it's just one of those things it comes, it goes," Bolt said. "I think I dragged my foot too hard so it kind of propelled me forward and then I just tried to correct myself, not try to panic and just make my way through." Bolt said his time will put him in a good place ahead of Jamaica's trials, starting June 30. "It means that I'm in very good nick. As I said the more I run the faster I'll get, the smoother my running will become and take it from there," he said. Two-time defending Olympic champion Shelly-Ann Fraser Pryce won the women's race in 11.09 ahead of world indoor champion Barbara Pierre of the United States who crossed in 11.11. American Johnny Dutch won the men's 400m hurdles in a new world leading time of 48.10 seconds bettering his own 48.36. Another American, David Oliver, clocked 13.09 to win the 110m hurdles ahead of Jamaican Deuce Carter. Miguel Francis of Antigua won the 200m in 19.88 beating Julian Forte who clocked 20.18. -Reuters