Bolt wins 100m in Rio but unhappy with performance 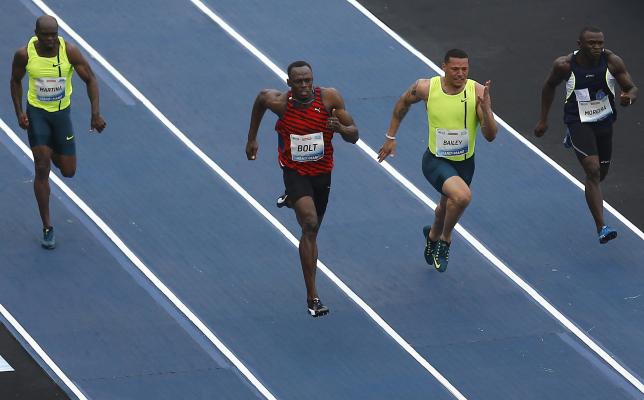 Bolt wins 100m in Rio but unhappy with performance

RIO DE JANEIRO - Usain Bolt cruised to victory in a sprint challenge on Sunday but the Jamaican world record holder declared himself unhappy with his performance in his first 100 metres of the season. Bolt pulled away from Ryan Bailey over the last 30 metres to finish in 10.12 seconds, 0.12 seconds clear of the American Olympian. Brazilian Jose Carlos Moreira was third in 10.51 and Churandy Martina of the Netherlands was fourth in 10.53. "I think it was poor execution overall," Bolt said. "I am sure my coach isn't going to be too happy. The good thing is that I won." The race, at Rio de Janeiro's horse-racing track in specially assembled lanes, was literally a walk in the park for the six-time Olympic gold medal winner. With the iconic statute of Christ the Redeemer behind him, Bolt clowned around on the starting line but was more serious in his post-race assessment. "Overall I didn't feel myself, but I think it is just lack of races, he said. "It will take time for me to get back to my best so I just need to run more and I'll be OK." "This is always my first race of the season so it is not going to be as fast as everyone wants it to be." The race was his third ‘Mano a Mano’ challenge in Rio, the city that will host the 2016 Olympics. Bolt, who won gold in the 100m, 200m and 4x100m relay in both Beijing and London, hopes to complete another Olympic triple gold in Brazil and he has come to the city four times to acclimatise. He is next scheduled to race in the World Relays in the Bahamas on May 2-3. In the women's challenge, Jamaican Veronica Campbell-Brown won her first 100m race of the season in 11.04. The two-time Olympic sprint champion easily beat U.S. Olympian Carmelita Jeter (11.19), Jamaican Kerron Stewart (11.30) and Brazil's Antonia Rosa (11.59). "I'm pleased," Campbell-Brown said. "Athletes always want to go faster but I understand that it is my first 100m race of the season and it is not a bad way to start." Richard Browne won the paraolympic challenge that was marred by the withdrawal of local hero Alan Fonteles. Fonteles, who rose to fame by beating Oscar Pistorius to the 200m gold in London, pulled out because of problems with his prosthetic leg. Browne won in 10.88. - Reuters