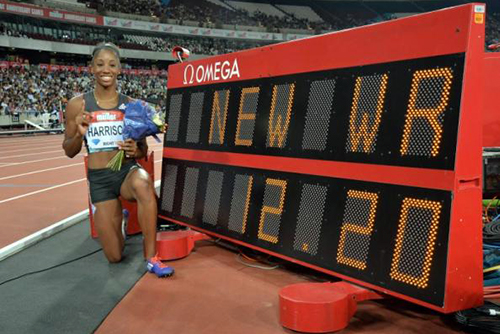 LONDON – Usain Bolt delivered on his top billing by winning the 200metres at the London Diamond League on Friday but the Jamaican was upstaged for once as American sprint hurdler Kendra Harrison broke one of the oldest world records in the book. Bolt, running his first 200metres race for a year in his last outing on the track before theOlympics, struggled for his usual rhythm as he laboured to victory in 19.89 seconds. However, having pulled out of the Jamaican trials last month with a hamstring strain, he was delighted to get through Friday’s race uninjured and can now go away and fine-tune for his attempt at the triple-triple of 100m, 200m and 4x100m relay golds in Rio. Harrison, however, will be watching the Games on TV having finished sixth in the 100m hurdles at the US trials after breaking the national record in May. She earned some consolation - as well as a $50,000 bonus - on Friday with a stunning world record. After delivering a silky smooth performance to win, the clock initially showed a modest 12.58 seconds. However, it was quickly corrected to 12.20, one hundredth of a second faster than the mark set by Bulgaria's Yordanka Donkova in 1988 - four years before Harrison was born. Brianna Rollins (12.57), Kristi Castlin (12.59) and Ali Nia (12.63), all Rio-bound after finishing 1-2-3 in the US trials, finished in the same order, behind Harrison on Friday. "I wanted to come out here with a vengeance to show that even though I won't be going to the Olympics I had to give it all I had," said Harrison, who collapsed to the track in tears when she saw the revised time. There was a more muted celebration for Bolt, who nevertheless delighted the crowd by winning then spending his usual remarkable amount of time signing autographs, posing for photos and giving endless media interviews. After a steady start he led halfway round the bend, but only just. As he hit the straight and the crowd expected the sort of surge that brought him three Olympic golds on the same track four years ago, it didn’t happen. Rocking noticeably, he had to work all the way to the line for a time considerably shy of American LaShawn Merritt's season-leading 19.74. Panama's Edward Alonso was second in 20.04 with Briton Adam Gemili third in 20.07. "I tried to hold my form. I'm not fully in shape and I don’t think I executed well - I need more work," said Bolt, who turns 30 next month. "I don't want to see it again. I wasn't that impressed," he added of his performance. "But I'm feeling good and happy I could run and finish the race without any injuries." Shaunae Miller of the Bahamas will also head to Rio in confident mood after posting a world-leading 49.55 to win the women's 400metres, setting up a mouth-watering one-lap showdown with Allyson Felix. There was plenty to cheer for the home fans in the Olympic Stadium now decked out in the claret and blue of its new tenants, West Ham United soccer club. Britain’s women’s 4x100m relay team opened proceedings by triumphing in a national record 41.82 seconds, the fastest time in the world this year. Laura Muir also channelled the spirit of 2012's "Super Saturday" when the crowd roared her home in a gutsy front-running victory in the women’s 1500m for a huge personal best and another British record of 3:57.49 – knocking Olympic champion Kelly Holmes off top spot. Frenchman Jimmy Vicaut won a disappointing 100 metres final in 10.02, having been the only man to dip under 10 seconds with a 9.96 in the heats. The action continues on Saturday, with the day’s highlight being the 5,000m, featuring home favourite Mo Farah. –REUTERS