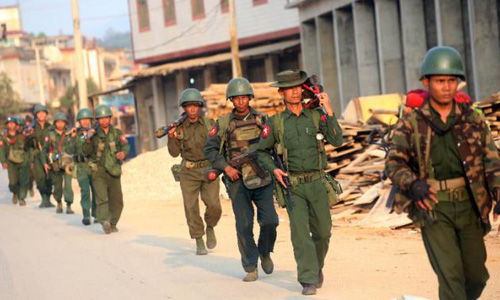 YANGON – Two police officers from an anti-narcotics task force were killed and three wounded when a bomb exploded in a volatile area of northeastern Myanmar near the border with China, a police official said on Monday. The motive for the bombing in Muse, a thriving trade center on the Chinese border, was not immediately clear. The town is also not far from the Kokang self-administered Region, where fighting between government forces and the ethnic rebel group the Myanmar National Democratic Alliance Army has caused heavy casualties in recent months. A police official, who asked not to be identified, said two police inspectors were killed when a bomb exploded while they were making a surprise check in a village near Muse, about 1,095 km (680 miles) northeast of Yangon on Saturday night.
"We’re still looking into it. We have no idea who carried it out, or for what motive," the police official said.
Bomb attacks are not uncommon in Myanmar, where about 20 armed ethnic groups have been fighting against successive central governments for autonomy. Drug-related fighting and similar attacks are also common in Shan state, a province located at the infamous Golden Triangle bordering China, Laos and Thailand and one of the world’s biggest producers of illegal narcotics. –Reuters