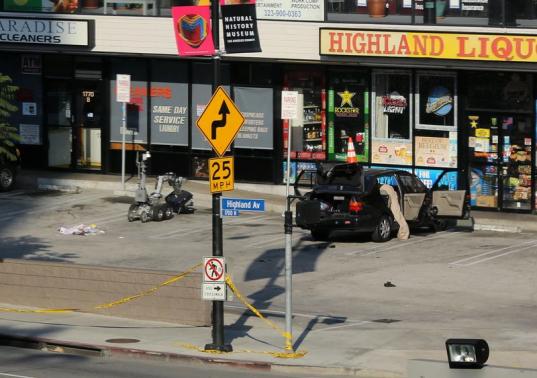 LOS ANGELES (Reuters) - A bomb scare triggered by an erratic motorist brandishing a propane tank at a shopping strip near the Hollywood venue for the upcoming Oscars show proved to be a false alarm on Thursday, but the man was detained, Los Angeles police said. Bomb squad investigators cordoned off a row of storefronts and the front entrance of a hotel across the street after a man who was driving recklessly in the area emerged from his car with the propane cannister, according to police on the scene. The man told police who stopped him that he also had two canisters of nitrous oxide, a non-flammable gas also known as laughing gas. He was taken into custody while the bomb squad was called to investigate the situation, police said. Bomb disposal technicians later detonated the items in question as a precaution, one officer said. Police spokeswoman Jane Kim said no explosives were found in the investigation. The incident unfolded at about 11 a.m. local time about a block away from the corner of Hollywood Boulevard and Highland Avenue, where the Dolby Theatre complex is located, and police were on the scene for roughly five hours before the all-clear was given. The area around the Dolby, site of the upcoming 87th annual Academy Awards ceremony on Sunday, had already been closed to traffic in preparation for the film industry's highest honors.