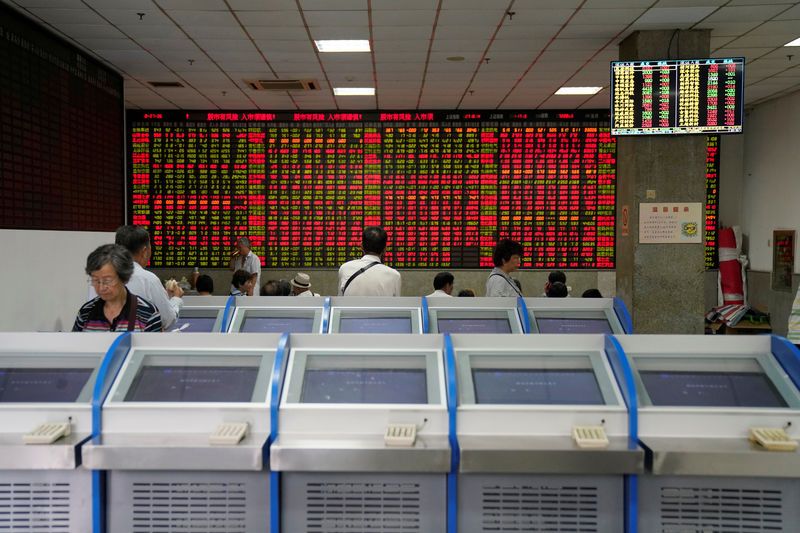 SYDNEY (Reuters) - Global bond markets were tense on Tuesday amid talk of central bank tightening and the risk of a robust reading on US economic growth later in the week, though stellar results from internet giant Alphabet supported tech stocks in Asia. Shares in the parent of Google  climbed 3.6 percent after hours to hit a record high, valuing the group at a cool $870 billion. That made up for an otherwise dull day on Wall Street where the Dow eased 0.06 percent, while the S&P 500 gained 0.18 percent and the Nasdaq  0.28 percent. In Asia, Shanghai shares seemed to get a boost from news Beijing would adopt a more “vigorous” fiscal policy, including company tax cuts. Chinese blue chips rose 1.6 percent to a one-month high, while MSCI's broadest index of Asia-Pacific shares outside Japan .MIAPJ0000PUS added 0.47 percent. Japan's Nikkei edged up 0.5 percent even as a disappointing reading on local factory activity suggested the threat of a trade war was starting to bite. Bond bulls were still smarting from speculation that the Bank of Japan is close to announcing measures to scale back its massive monetary stimulus, a risk that lifted long-term borrowing costs globally. Markets were worried that Japanese investors would have less incentive to hunt offshore for yield, said ANZ economist Felicity Emmett. “The 10 basis-point steepening in the Japanese yield curve is massive in the context of a market that rarely moves more than 1 basis point,” she added. “It reflects a broader fear that central banks are reducing their purchases while US bond supply is set to rise significantly.” As a result, 10-year US Treasury yields jumped to their highest in five weeks around 2.96 percent US10YT=RR and were again nearing the psychological 3 percent bulwark.

Part of the shift in yields was because of chatter that data on second-quarter US economic growth (GDP) due on Friday would easily top current forecasts of 4.1 percent. Dealers noted some media reports President Donald Trump himself was predicting an outcome of 4.8 percent. That would not be out of bounds given the much-watched Atlanta Fed GDP tracker puts growth at an annualised 4.5 percent. Such a strong outcome would only add to the risk of faster rate hikes from the Federal Reserve and underpin the dollar. Against a basket of currencies, the dollar was hovering at 94.607 .DXY compared to a low of 94.207.It bought 111.22 yen , against  trough of 110.75. The euro  lapsed to $1.1690, having run into profit-taking at a peak of $1.1750 overnight. China's yuan went the other way, slipping to a one-year low on the dollar with Beijing saying its value was driven by market forces. In commodity markets, oil prices eased as the focus turned to oversupply worries and away from escalating tensions between the US and Iran. US crude CLc1 lost 16 cents to $67.73, while Brent LCOc1 dipped 23 cents to $72.83 a barrel. Spot gold XAU= was a fraction lower at $1,222.82.