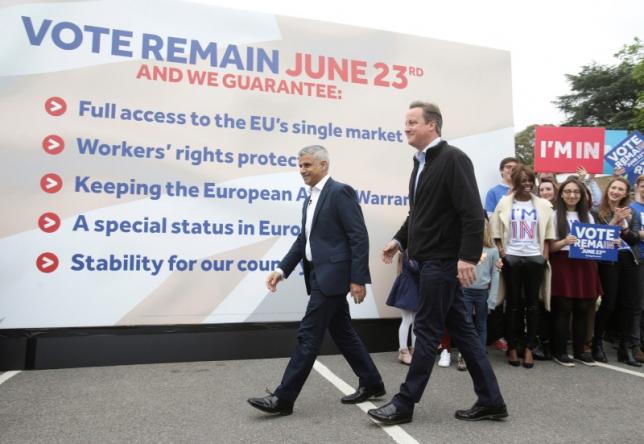 LONDON - The heads of some of Britain's biggest manufacturers warned that leaving the European Union would trigger widescale job losses and a business survey showed the weakest economic outlook in over three years due to uncertainty over the referendum. Britons will vote on June 23 on whether to remain in the EU, prompting business leaders to join forces to say that quitting the world's largest trading bloc would hit demand, jobs and pay. On Wednesday the heads of Siemens, Airbus and GKN will say at a campaign event that the future of UK manufacturing jobs would be at risk if a vote to leave resulted in trade barriers making Britain a less attractive place to do business. "A UK outside of the EU facing increased costs and regulatory uncertainty will lead to companies such as ours finding the UK a less attractive place to invest, which will have an impact on future jobs," Nigel Stein, CEO of engineering group GKN, said in a statement. Polls have shown Britain's historic referendum is too close to call, with both sides arguing over the impact a vote to leave would have on the economy. Those wanting Britain to stay in the 28-member EU say access to the single market has boosted demand while those campaigning to leave say the EU's open-door policy on migration has driven down wages for the average worker. The manufacturers' comments came as a Confederation of British Industry survey showed the balance for output expectations for the next three months fell to +13 from +15 in April - its lowest since February 2013. "While underlying conditions for the UK economy are looking pretty stable, the risks are clear as day with uncertainty still brewing over the global outlook and the EU vote around the corner," CBI economist Rain Newton-Smith said. "Expectations for growth have slipped and are well below the levels of the last few years," she added. WEEKLY WAGE In a separate report, Britain's Trades Union Congress said it estimated leaving the EU would lower the average weekly wage of 492 pounds by around 38 pounds, with manufacturing jobs especially badly hit. But Gisela Stuart, a Labour lawmaker and chair of Vote Leave, said workers would be better off outside the EU. "The EU has been a disaster for workers, with unemployment in the double digits across the euro zone and harsh austerity measures implemented at the expense of vital public services," she said in a statement. Britain's economy slowed in the first three months of the year, and is expected to lose further momentum as uncertainty surrounding the referendum takes its toll. The British Retail Consortium said on Wednesday its overall index for shop prices fell to its lowest level since November 2009, a reminder of how weak inflation pressures are. Shop prices eased by 1.8 percent year-on-year in May, compared with a 1.7 percent decline in April. "We've experienced a record run of falling shop prices and, for the time being, there's little to suggest that'll end any time soon," Helen Dickinson, BRC chief executive said. "Looking slightly longer term we know that the recent commodity price increases will start to put pressure on retailers to raise their own prices." The price of oil LCOc1 has risen above $50 a barrel, having gained 20 percent in the last month alone. -Reuters