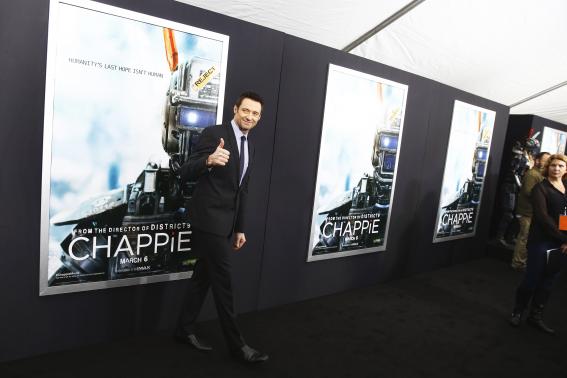 LOS ANGELES - Neill Blomkamp's "Chappie" and "Unfinished Business" with Vince Vaughn added up to a weekend to forget at the U.S. box office. Overall ticket sales plunged as "Chappie," a science-fiction adventure about a sentient robot, topped charts with a weak $13.3 million. Going into the weekend, Sony Pictures was aiming for a debut of roughly $15 million and some analysts expected the film could hit $20 million. Reviews were tepid and the picture is the latest in a long line of R-rated new releases such as "Fifty Shades of Grey" and "Focus," which may have hurt it with moviegoers looking for something that appeals to kids as well as adults. "There's been a glut of R-rated movies starting from the first of the year," said Rory Bruer, Sony's worldwide distribution chief. "I think there's some R-rated fatigue." Original science-fiction films have had a rocky go of it at the box office of late, with "Seven Son," "Jupiter Ascending" and "Project Almanac" all crashing on the shoals of audience indifference. "Chappie" was produced for $49 million and Sony isn't ready to concede defeat on the picture just yet, predicting it could make a profit when foreign markets are taken into account. Bruer notes that Blomkamp's previous films, "District 9" and "Elysium," were able to stick around for a long time after their debuts. "The movie plays well and the uniqueness of the characters is going to drive a conversation that I do believe will help the film in the coming weeks," he said. "Chappie" fared better than "Unfinished Business," another R-rated whiff. The business trip comedy eked out a gloomy $4.8 million across 2,777 locations. It ranks as the lowest debut of Vaughn's career, raising serious questions about his appeal. The "Wedding Crashers" star has headlined an array of flops over the past four years, including "The Dilemma," "Delivery Man," "The Internship" and "The Watch." A lot is riding on the second season of "True Detective" in order to return Vaughn to audiences' good graces. Twentieth Century Fox distributed the $35 million film, which New Regency financed. There was one diamond in the crop of dinged up new releases - "The Second Best Exotic Marigold Hotel." The comic tale of retirees making new lives for themselves in India bowed to a sterling $8.6 million across 1,573 locations. Fox Searchlight is distributing the comedy which was co-produced by Participant Media and cost a mere $10 million to produce. Last week's champ, the Will Smith heist film "Focus," had to settle for runner-up status, taking second place on the charts with $10 million. That brings the film's take to $34.6 million. Among holdovers, "Kingsman: The Secret Service" took in $8.3 million, pushing its take to $98 million, while "Fifty Shades of Grey" added $5.6 million to its $156.4 million haul. "The Spongebob Movie: Sponge Out of Water" continued to benefit from being one of the only family-friendly releases, picking up $7 million and driving the picture to $149 million at the stateside box office. – (Reuters)