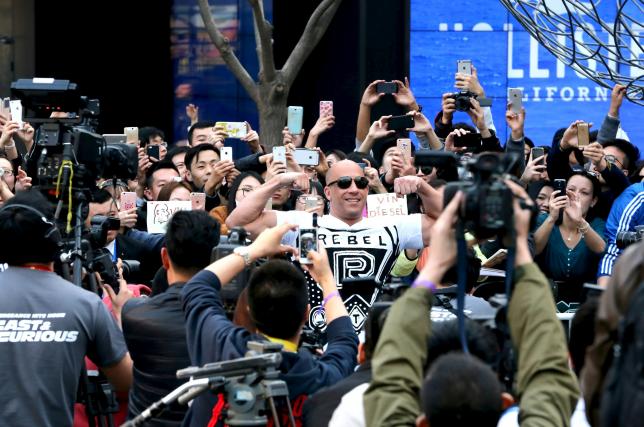 LOS ANGELES - "Furious 7" raced to the top of the domestic box office, picking up a massive $143.6 million in its opening weekend. That establishes a new high-water mark for the month of April, blowing past the $95 million debut of "Captain America: The Winter Soldier," as well as marks the highest grossing kick-off for any film in the "Fast and Furious" franchise. It also ranks ninth among the top ten openings in history. Audiences flocked to see star Paul Walker in one of his final roles. The actor died in a 2013 car crash at the age of 40 and his work on the film was completed by using digital technology and a series of stand-ins. "This is a bittersweet installment in the franchise," said Phil Contrino, vice president and chief analyst at BoxOffice.com. "[Walker's] passing made this movie more intriguing for people who hadn't seen some of the installments. It raised awareness and its success is a tribute to him." Universal Pictures spared no expense in bringing the latest chapter in the fast cars and gravity-defying-stunts series to the big screen, shelling out $190 million on the production. It unspooled in 4,003 North American theaters, earning $14 million on 365 Imax screens and $11.5 million from premium large format screens. Going into the weekend, most analysts estimated that the film would open in the $115 million range. Foreign numbers have yet to be released, but they promise to be steroidal. Internationally, the film rolled out across 10,500 screens in 63 territories. "This is the next member of the billion dollar club and that's a rarefied place to be," said Contrino. "This thing is on fire." With an A CinemaScore and strong reviews, "Furious 7" could be one of the few modern blockbusters that hangs in for more than a few weeks. The month of April is lean on blockbuster fare and "Furious 7" won't get serious competition until "The Avengers: Age of Ultron" debuts on May 1. Last weekend's box office champion, DreamWorks Animation's "Home," showed impressive stamina. The animated tale picked up $27.4 million in its sophomore frame, pushing its domestic total to $95.6 million. In third place, R-rated comedy "Get Hard" earned $12.9 million. The Will Ferrell and Kevin Hart team-up fell 62% from its opening number, bringing its stateside haul to $57 million. "Cinderella" snagged a fourth place finish, picking up $10.3 million stateside to push its domestic bounty to $167.3 million. Globally, the Disney release is closing in on $400 million. "The Divergent Series: Insurgent" rounded out the weekend top five, nabbing $10 million and driving the film to $103.4 million domestically. Among art house releases, Noah Baumbach's "While We're Young" expanded from four to 34 theaters, picking up $492,976. The A24 release has earned $791,450 in two weeks. Radius-TWC's "It Follows" also continued to expand, moving from 1,218 to 1,655, though its gross dipped 35% to $2.5 million. The critically adored horror film has made $8.5 million since debuting on March 13. - Reuters