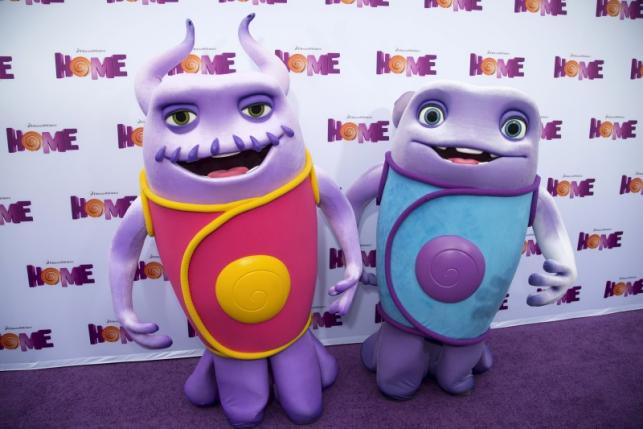 LOS ANGELES - Jeffrey Katzenberg must be breathing a huge sigh of relief after the embattled DreamWorks Animation chief scored a much needed box office win with the release of “Home.” The family film was the weekend’s top ticket seller, pulling in a sterling $54 million, easily eclipsing projections that had it bowing to between $30 million to $35 million. It’s one of the studios best ever openings for an original movie and the biggest debut it has had since 2012’s “Madagascar 3: Europe’s Most Wanted” kicked off to $60.3 million in 2012. The studio has suffered through a string of film flops such as “Turbo” and “Mr. Peabody and Sherman,” as well as failed sales to Hasbro and SoftBank. “Home” is the only film it is releasing this year, so expectations for the film about an alien invasion were high and scrutiny was intense. “Home” cost $130 million to produce and launched in 3,708 locations. Fox distributed the picture. The film’s success could be reflected in DreamWorks Animation’s stock price. Shares of the company closed Friday up 3 percent at $22.68 and continued to climb in after-hours trading on the strong box office results. “Home’s” results continue what has been a very strong year for family fare, after “Paddington” and “The SpongeBob Movie: Sponge Out of Water” did impressive business by appealing to the parents and kids set. “You had parents talking to one another and saying it was a good movie for kids and that’s enough for something to be successful,” said Phil Contrino, vice president and analyst with BoxOffice.com. “With family skewing movies it can be feast or famine and this year there’s been a whole lot of feasting.” “Get Hard,” the R-rated prison comedy with Will Ferrell and Kevin Hart, captured second place on the box office charts by appealing to a very different segment of the moviegoing population. The Warner Bros. release pulled in $34.6 million across 3,175 locations and cost an economical $40 million to produce. The opening weekend crowd was 54 percent male and 61 percent over the age of 25. It ranks as the number one opening for an R-rated film starring Ferrell or Hart. “The chemistry between them was terrific,” said Dan Fellman, Warner Bros. domestic distribution chief. “They’re both popular and well liked. I hope we can do another one with them.” Radius-TWC scored with “It Follows,” expanding from 32 to 1,218 locations, and picking up $4 million in the process. That was good enough for a fifth place finish. The well-reviewed horror film has earned $4.8 million since debuting on March 13. Last weekend’s champ, “Insurgent,” fell 58 percent to make $22 million and nab third place on the charts. That brings the “Divergent” sequel’s total to $86.4 million after two weeks. Disney’s “Cinderella” pulled in $17.5 million to grab fourth place and bring its total to $150 million. “Kingsman: The Secret Service” continued to impress, earning $3 million for a sixth place finish and pushing its total to nearly $120 million. In limited release, A24 got off to a strong start with “While We’re Young,” Noah Baumbach’s look at two New Yorkers in the throes of middle aged crisis and the Brooklyn hipsters who inspire them. Released in just four theaters, the film earned $242,152, for a per-screen average of $60,538. The film is scheduled to expand its footprint on April 10. Not even the combined star wattage of Jennifer Lawrence and Bradley Cooper could save “Serena.” The oft-delayed drama premiered on 60 theaters in addition to showing on VOD. It pulled in a paltry $100,000 and a per-screen average of $1,667. “Silver Linings Playbook” this decidedly is not. Overall box office numbers have yet to be finalized, but it appears as though they will trump the prior-year period when “Noah” opened to $43.7 million by approximately 10 percent, a particular impressive finish given that the “March Madness”/NCAA basketball tournament is enjoying strong TV ratings. Next week brings the debut of “Furious 7,” which is hurtling towards a record $100 million-plus opening. Spring is here. - Reuters