ISLAMABAD (92 News) – In the backdrop of rising Pak-India tensions, British-Pakistani boxer Amir Khan on Tuesday visited the Line of Control (LoC) and raised voice for the Kashmiri people against Indian brutalities in Indian Occupied Kashmir (IoK). Amir Khan visited the LoC as part of a ‘humanitarian visit to raise his voice for peace’. The visit by the boxer following India’s decision to strip occupied Kashmir of its autonomous status. “People are being tortured and children are being killed,” he said, adding, “I was watching all of this on my television in Britain, but I could not stay silent.” Boxer Amir Khan further said that he will raise his voice against the brutalities of Indian occupation forces in IoK. He said that he came to Pakistan for informing the world about worsening situation of the IoK. 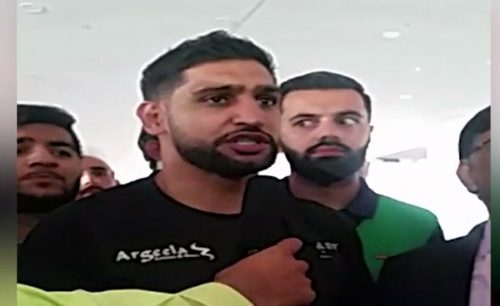 Earlier on Saturday, the British-Pakistani boxer announced that he would visit the Pakistani side of the Line of Control (LoC) as part of a “humanitarian visit to raise his voice for peace”. “…a lot of innocent people are suffering,” he tweeted.

Next week I am visiting Pakistan, Line of Control(LOC) on a humanitarian visit to raise my voice for peace, as a lot of innocent people are suffering. Thank you @officialdgispr for the opportunity #UNcharter #kashmir #peace

The British-Pakistani boxer thanked Inter-Service Public Relation (ISPR) Director General Maj General Asif Ghafoor for the opportunity to let him visit the LoC. “I’m visiting Pakistan, Line of Control( LOC), to make my voice heard, bring greater awareness to the terrible situation in Kashmir and call for peace,” he said in another tweet.

I’m visiting Pakistan, Line of Control( LOC), to make my voice heard, bring greater awareness to the terrible situation in Kashmir and call for peace @UN charter Thank you @officialdgispr for the opportunity

On the other side, in Indian Occupied Kashmir (IoK), the authorities continued to impose strict curfew and lockdown across the Kashmir valley on the 23rd consecutive day, on Tuesday, to prevent people from holding demonstrations against Indian occupation and India’s move of ending special status to Jammu and Kashmir. Due to severe Lockdown, people are facing acute shortage of essential commodities including baby food and life-saving medicines and the valley represents a humanitarian crisis. Hundreds of thousands of people are besieged and Jammu and Kashmir has become a big jail for its inhabitants. The Indian authorities have been maintaining a strict curfew in the Kashmir valley since 5th August when Narendra Modi government announced scraping of the special status of Jammu and Kashmir. Hundreds of thousands of Indian troops and police personnel deployed in every nook and corner of the territory are not allowing people to come out of their homes. The authorities also continue to impose information blockade as TV channels and internet links are snapped and restrictions on media remain in place since 5th August.