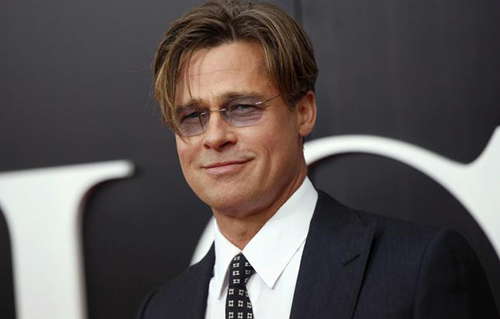 NEW YORK – Brad Pitt will undergo drug and alcohol tests as part of a temporary agreement with his estranged wife Angelina Jolie that will allow him to see their six children, two people familiar with the agreement said on Friday. The temporary agreement, which will run until Oct. 20, was the first breakthrough in the bitter split between the superstar couple since Jolie filed for divorce on Sept. 20. The actress cited "the health of the family" and sought full physical custody of the children. Pitt, 52, and Jolie, 41, both agreed to undergo individual counseling, and Pitt's initial visit with the children will take place with a therapist, said the sources, who spoke on condition of anonymity. No ruling or decision has been made on who will eventually have legal or physical custody, they said. Representatives of Pitt and Jolie did not return calls for comment on Friday. Media reports say that since their separation on Sept. 15, Pitt has not seen the three biological and three adopted children he had with Jolie. The couple, dubbed Brangelina during their decade-long romance, split following an incident on a private plane in which Pitt was reported to have lost his temper in front of one or more of the children. The Federal Bureau of Investigation has said it is evaluating whether to pursue an investigation into the matter. Both stars have laid low since the announcement of their divorce. Pitt this week skipped the red carpet premiere in Los Angeles of his latest movie project, saying he wanted to focus on his "family situation." Pitt's next film is the November war drama "Allied" in which he stars with French actress Marion Cotillard. Cotillard last week issued a statement strongly denying any involvement in Pitt's divorce after rumors that they became romantically involved during filming. – Reuters