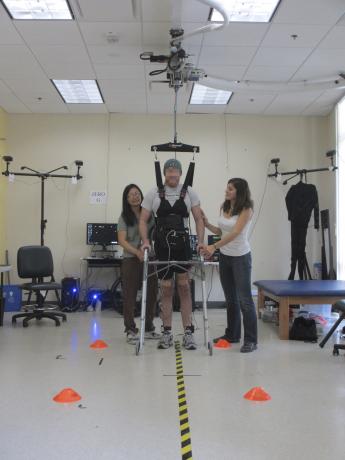 LOS ANGELES – A brain-to-computer technology that can translate thoughts into leg movements has enabled a man paralyzed from the waist down by a spinal cord injury to become the first such patient to walk without the use of robotics, doctors in Southern California reported on Wednesday. The slow, halting first steps of the 28-year-old paraplegic were documented in a preliminary study published in the British-based Journal of NeuroEngineering and Rehabilitation, along with a YouTube video. The feat was accomplished using a system allowing the brain to bypass the injured spinal cord and instead send messages through a computer algorithm to electrodes placed around the patient's knees to trigger controlled leg muscle movements. Researchers at the University of California, Irvine, say the outcome marks a promising but incremental achievement in the development of brain-computer interfaces that may one day help stroke and spinal injury victims regain some mobility. Dr. An Do, a study co-author, said clinical applications were many years away. Results of the UC Irvine research still need to be replicated in other patients and greatly refined. Nevertheless, the study proved it possible "to restore intuitive, brain-controlled walking after a complete spinal cord injury," said biomedical engineer Zoran Nenadic, who led the research. The steps taken a year ago by the experiment's subject, former graduate student Adam Fritz, who injured his back in a motorcycle accident, appear modest as seen in the video. Fritz propelled himself over a distance of 3.6 meters (11.8 feet) across the floor of UC Irvine's iMove Lab, though his weight was partially supported by an overhead suspension harness and a walker he grasped to keep his body upright, researchers said. The weight support was necessary because the patient lacked any sensation in his legs or feet, Do explained. Still, the experiment built on earlier UC Irvine studies in which brain signals were transmitted to a robotic prosthesis attached to the patient's legs to produce movement, Do said. In previous research by other scientists, a brain-computer interface has been used to allow paralyzed patients to grasp a cup of coffee with a robotic arm and raise the beverage to their mouths. The latest study, which began about five years after Fritz became paralyzed, involved months of mental training in which he practiced thinking about walking to produce necessary leg-moving brain waves. Those signals were then picked up by an electroencephalogram (EEG) he wore as a cap and were transmitted to a computer for processing by a special algorithm that could isolate the messages related only to leg motion and convert them to signals that would stimulate the patient's muscles to walk. The scientists and patient first practiced with a virtual-reality-like video game in which Fritz was trained to control a walking avatar. He also underwent extensive physical rehab to strengthen his muscles. Fritz next practiced walking in the actual lab while suspended slightly above the floor. On his 20th outing, he finally took his first real steps on the ground. Researchers hope to refine the technology by miniaturizing the EEG component enough to be implanted inside the patient's skull or brain, allowing for clearer reception of the neural messages and perhaps the delivery of pressure sensation from sensors in the foot back to the brain. –Reuters