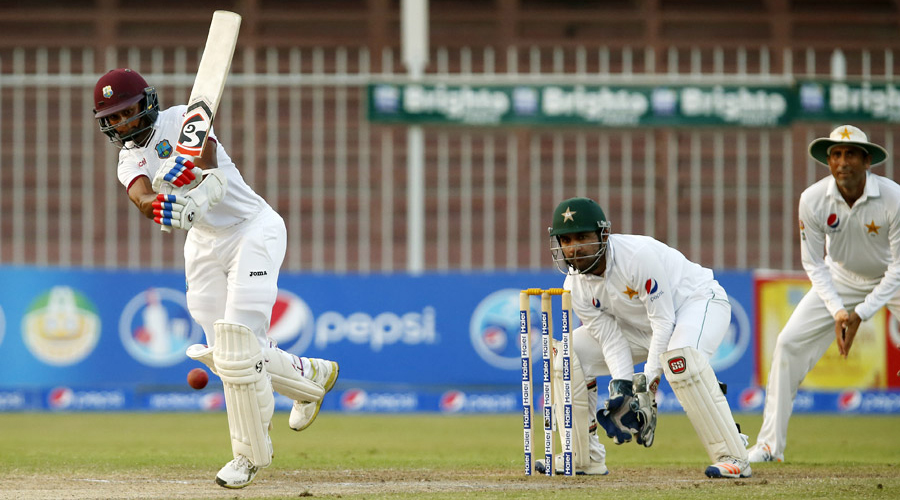 SHARJAH (92 News) – Pakistan's dream of clinching a historic 9-0 victory shatters as Brathwaite, Dowrich guide the visitors to a victory by five wickets. Batting well against a good bowling unit wasn't as easy but Jason Holder and Co. finally did it. Opener Kraigg Brathwaite, who carried his bat through the first innings with 142 not out, capped a memorable match by finishing with an unbeaten 60 as West Indies secured victory without further loss after resuming at 114 for 5. Dowrich also scored 60 not out as he and Brathwaite added an unbroken 87 runs for the sixth wicket. Pakistan won the three-match series 2-1 after winning the first Test in Dubai by 56 runs in Dubai and the second by 133 runs in Abu Dhabi. The victory ended a 13-match streak without a victory (10 losses and three draws) for West Indies, stretching back to May last year when they beat England at home. Pakistan won the three-match series 2-1. Pakistan leg-spinner Yasir Shah claimed figures of 3-40 in the second innings while paceman Wahab Riaz, who had taken a five-wicket haul in the first, added two more to his tally. Pakistan incurred a shocking batting collapse after beginning their day on 87-4 before a battling 91 by opener Azhar Ali and 42 for Safraz Ahmed looked to have steadied the ship. However, they lost their last five wickets for 33 to end on 208 with West Indies’ captain Jason Holder claiming his first five-wicket test haul.   SCOREBOARD