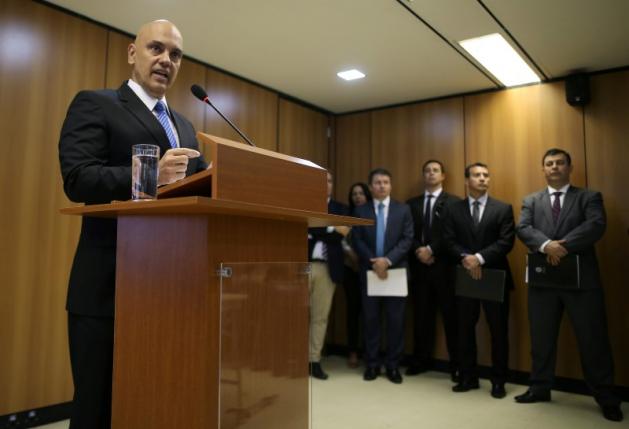 BRASILIA – Brazil arrested 10 people on Thursday on suspicion of belonging to a group supporting Islamic State (IS) and preparing acts of terrorism during next month's Olympics in Rio de Janeiro, Justice Minister Alexandre Moraes said. The loosely organized group were all Brazilian citizens and in contact via internet messaging groups such as WhatsApp and Telegram, but did not know each other personally, the minister said. The group did not have direct contact with IS though some of its members had made "pro forma" declarations of allegiance to the militant Islamist group, the minister said. He did not elaborate. "Those involved participated in an online group denominated 'the defenders of Sharia' and were planning to acquire weapons to commit crimes in Brazil and even overseas," Moraes told a news conference. "It was an absolutely amateur cell, with no preparation at all, a disorganized cell," the minister said, adding that authorities decided to intervene when the group started to plan actions. He said members of the group had visited a weapons site in neighboring Paraguay that sells AK-47 assault rifles, but there was no evidence they acquired any weapons. Two people will be brought in for questioning, in addition to the 10 already detained, he added. Interim President Michel Temer had called an emergency cabinet meeting following the arrests, the first under Brazil's tough new anti-terrorism law approved this year. The minister said the leader of the group was based in the southern Brazilian city of Curitiba, with others spread in nine Brazilian states. A court in the state of Parana, where Curitiba is based, said there were indications that the group was planning to use weapons and guerilla tactics to achieve its aim. Brazil's intelligence agency said on Tuesday it was investigating all threats to the Rio Olympics, which start on Aug. 5, after a presumed Brazilian Islamist group pledged allegiance to IS. The SITE Intelligence Group that monitors the internet reported the previously unknown group calling itself "Ansar al-Khilafah Brazil" said on the Telegram messaging app on Sunday that it followed IS leader Abu Bakr al-Baghdadi, and had promoted IS propaganda in Arabic, English and Portuguese. Brazilian authorities stepped up security measures following the truck massacre in Nice, France last week, planning security cordons, additional roadblocks and the frisking of visitors in Rio de Janeiro for the Olympics. –Reuters