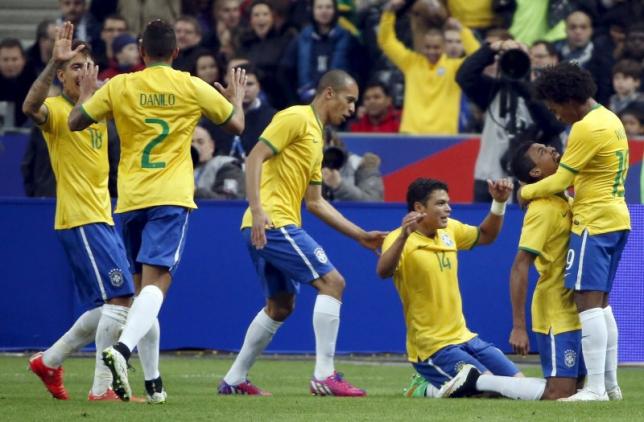 PARIS - Brazil inflicted France's first defeat since the World Cup when a perfectly executed second-half performance earned them a 3-1 win in a friendly game at the Stade de France on Thursday. Neymar and Luiz Gustavo scored after the interval with Oscar having cancelled out Raphael Varane's first-half opener as the visitors notched a seventh consecutive win in the aftermath of their embarrassing World Cup campaign on home soil. Brazil have now scored 17 goals and conceded two since they hosted the finals, which they finished in fourth place after a humiliating 7-1 semi-final defeat by eventual championsGermany and a 3-0 loss to the Netherlands in the third-place match. World Cup quarter-finalists France enjoyed a great start in a lively clash but without the influential Paul Pogba through injury they were eventually overwhelmed in midfield. "We were punished for our mistakes. They are very quick up front," said France coach Didier Deschamps, who skippered France to their 3-0 World Cup final win against a Brazilside captained by his counterpart Dunga in 1998. "We knew we would be playing a good team. We need to be more accurate, more efficient." There was a minute's silence before the match in memory of the 150 people who died in the Germanwings flight 9525 that crashed in France on Tuesday. DANGEROUS FRANCE Brazil dominated possession early on but Les Bleus were the most dangerous side, with Karim Benzema's point-blank header being spectacularly saved by Jefferson in the 12th minute. The Brazil keeper, however, could do nothing nine minutes later when Varane headed home from Mathieu Valbuena's corner as the visitors' defence again proved clumsy on set pieces. Brazil levelled five minutes before the break when Oscar scored their first goal at the Stade de France in four visits, pushing the ball between goalkeeper Steve Mandanda's legs after being nicely set up in the box by Firmino. Eight minutes into the second half, Neymar fired a powerful angled shot into the roof after being played in by Willian. Didier Deschamps's France team came close to an equaliser shortly afterwards but Benzema skied his volley over the bar. Luiz Gustavo then headed home from Oscar's corner to make it 3-1 and wrap up a deserved win -- Brazil's first in France since 1992. Two minutes later, Willian raced down the left but was denied by Mandanda, who was deputizing for the injured Hugo Lloris and did not have a particularly impressive match. France, who only have friendlies to play until they host the Euro 2016 finals, host Denmark in St Etienne on Sunday. - Reuters