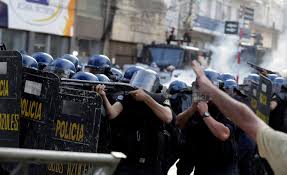 SAO PAULO (Reuters) - Police arrested five Brazilian drug traffickers on Thursday accused of plotting to free a leader of the Red Command drug gang from jail in Paraguay, Brazil’s federal police said. The four men and a woman were arrested in a joint operation in Paraguay involving police from both countries, the federal police said in a statement. The group had stored weapons in three rented houses and planned to help a Red Command leader escape this weekend, the statement said. It did not give the exact location of the arrests. Red Command is one of the largest drug gangs in Brazil, where a federal intervention in Rio de Janeiro state has targeted warring drug gangs since February.