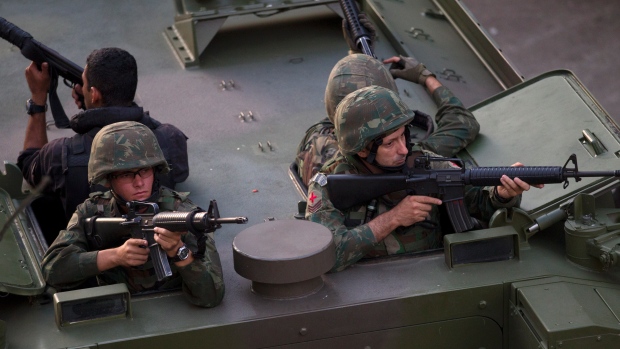 RIO DE JANEIRO - Police raided a stadium in the northeastern city of Recife and other offices around Brazil as part of an investigation into fraud in contracting for the arena, which was built for the 2014 FIFA World Cup football tournament. In a statement, federal police said contracts for the Arena Pernambuco, built and operated by a consortium led by contractor Odebrecht SA [ODBES.UL], were overpriced by as much as 42.8 million reais (7.84 million pounds) in 2010, when the project was being developed. With inflation and including additional costs that eventually worked their way into the project, the fraud today would total more than 70 million reais, police said. Investigators said the overpriced contracts amounted to fraud and a lack of transparency meant to distort bidding among competitors in the stadium project. Odebrecht also enjoyed more time to prepare its bid for the project than other competitors who sought to take part, investigators said. Odebrecht called the raids "illegal and abusive" and said it was shocked the company had not been contacted beforehand to explain a stadium project that it had won in competitive public bidding and completed without government funding. "Once again offices and homes of executives were violently subjected to arbitrary searches and detentions with the pretext of investigating alleged irregularities," it said in a statement. Odebrecht took part in four of the projects to build or modernize 12 stadiums that hosted the World Cup, an event whose cost was widely criticized in Brazil, despite its success as a spectacle. The full price tag for many of the projects built for the World Cup was still unclear because of cost overruns, contract disputes and other uncertainties. The Arena Pernambuco alone is believed to have cost well more than the already over-budget 533 million reais calculated by the federal government. Police said they were conducting searches at the stadium, corporate offices and homes of consortium executives in the states of Pernambuco, Bahia, Minas Gerais, Sao Paulo, Rio de Janeiro and Brasilia, Brazil's capital. Odebrecht, Latin America's biggest builder and a company with a long history of major infrastructure and other public construction projects, was also at the centre of a corruption probe into state-run oil company Petroleo Brasileiro SA, or Petrobras. Marcelo Odebrecht, Odebrecht's chief executive and grandson of the company's founder, is one of dozens of senior Brazilian corporate and political figures ensnared in the Petrobras scandal, in which contractors agreed to overpriced jobs in exchange for kickbacks. -Reuters