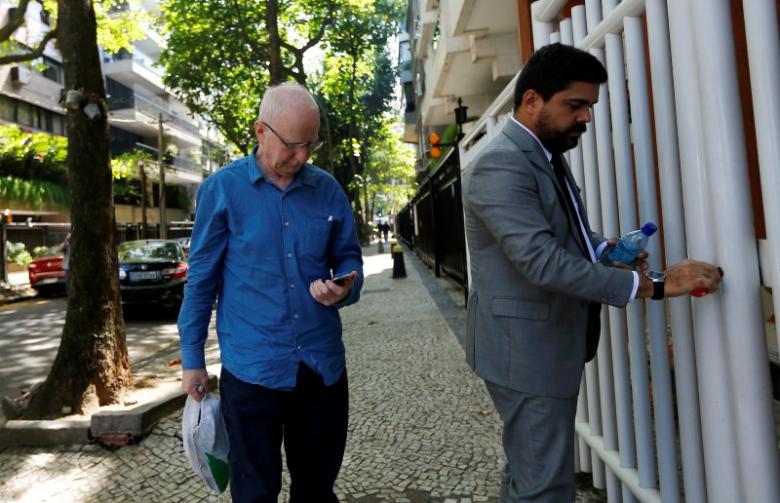 RIO DE JANEIRO - Brazilian police said on Monday they have "overwhelming" proof the former head of the Olympic Council of Ireland led an illegal ticketing ring at the Rio Games and are preparing to make a formal accusation later in the week. Patrick Hickey will be accused, along with Kevin Mallon, a director of international sports hospitality company THG Sports, with scalping, ambush marketing and criminal association, said Rio de Janeiro police chief Ricardo Barbosa. Taken together, the crimes are punishable with up to eight years in jail, according to police. "We have vast amounts of documentary proof and our investigation will wind up on Thursday," Barbosa said. "The illegal acts were committed by the president of the Irish committee who had complete control over the scheme and the power to make decisions." A lawyer for Hickey did not respond to requests for comment. The 71-year-old was released last week from the Bangu 10 maximum security prison, where he had been held since his Aug. 10 arrest at a luxury beachfront hotel during the Games. In addition to Hickey and Mallon, another seven people are wanted by police for alleged ties to the ticket price-gouging scheme. Hickey, formerly Europe's top Olympic official, temporarily stepped aside as an IOC executive board member, head of the European Olympic Committee and the Olympic Council of Ireland after his arrest. Mallon met with police on Monday but declined to answer questions during a 40-minute encounter. Hickey is due to meet with officers on Tuesday but police said they already have enough evidence to go to trial, even without their cooperation. "They have a constitutional right to remain silent but even if they do the proof is overwhelming," Barbosa said. "That won't bother us because we have other evidence such as witnesses, materials we have collected through search and seizure, emails, conversations and other things." Barbosa said he would send his report on Thursday to state prosecutors, who will then decide on presenting formal charges to a judge. Police will ask for the two men, both of whom have already had their passports confiscated, to remain in Brazil indefinitely. The announcement comes just two days before the Paralympic Games open in Rio de Janeiro. The sale of Paralympic tickets has been disappointing and there are still hundreds of thousands available for most events. Police said they did not believe the ring was involved Paralympic tickets. -Reuters