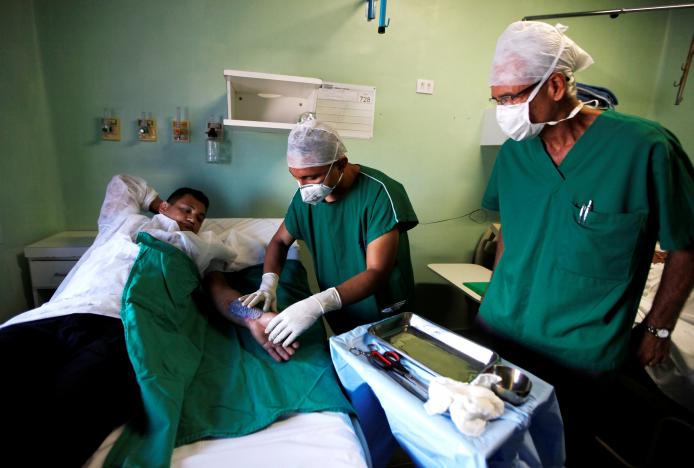 FORTALEZA, Brazil –Researchers in Brazil are experimenting with a new treatment for severe burns using the skin of tilapia fish, an unorthodox procedure they say can ease the pain of victims and cut medical costs.

Frozen pig skin and even human tissue have long been placed on burns to keep them moist and allow the transfer of collagen, a protein that promotes healing.

Tilapia is abundant in Brazil's rivers and fish farms, which are expanding rapidly as demand grows for the mildly flavoured freshwater fish.

Scientists at the Federal University of Ceara in northern Brazil have found that tilapia skin has moisture, collagen and disease resistance at levels comparable to human skin, and can aid in healing.

In China, researchers have tested tilapia skin on rodents to study its healing properties, but scientists in Brazil say their trials are the first on humans.

"The use of tilapia skin on burns is unprecedented," said Odorico de Morais, a professor at Ceara University. "The fish skin is usually thrown away, so we are using this product to convert it into something of social benefit."

The tilapia treatment can speed up healing by several days and reduces the need for pain medication, the Brazilian researchers say.

University lab technicians treated the fish skin with various sterilizing agents, and sent it to São Paulo for irradiation to kill viruses before packaging and refrigeration. Once cleaned and treated, it can last for up to two years, researchers say. The treatment removes any fish smell.

In medical trials, the alternative therapy has been used on at least 56 patients to treat second- and third-degree burns. Patients, with limbs covered by fish skin, resemble creatures from a science fiction movie.

Car mechanic Antonio Janio badly burned his arm when a cylinder of soldering gas leaked. He says the tilapia skin treatment is more effective than bandages that need to be changed every two days.

The fish skin has high levels of collagen type 1, stays moist longer than gauze, and does not need to be changed frequently.

The tilapia skin is applied directly onto the burned area and covered with a bandage, without the need for any cream. After about 10 days, doctors remove the bandage. The tilapia skin, which has dried out and loosened from the burn, can be peeled away.

"Use the tilapia skin. It's excellent," Janio said. "It takes the pain away. You do not need to take medicine. In my case, I did not need it, thank God."

Morais said that the tilapia skin treatment costs 75 percent less than the sulfadiazine cream typically used on burn patients in Brazil, as it is a cheap fish-farming waste product.

The researchers hope the treatment will prove commercially viable and encourage businesses to process tilapia skin for medical use. –Reuters