Brazil's Danilo ruled out of World Cup with ankle problem 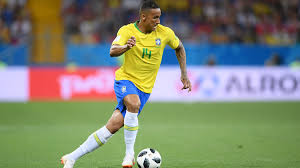 Brazil's Danilo ruled out of World Cup with ankle problem

KAZAN, Russia (Reuters) - Brazil right back Danilo has been ruled out of the rest of the World Cup after suffering ankle ligament damage in training on the eve of Friday’s quarter-final against Belgium, the Brazilian Football Confederation (CBF) said in a statement.
The 26-year-old suffered a thigh problem in Brazil’s opening group game against Switzerland and has since been replaced in the team by Fagner. Danilo himself came into the side after Dani Alves pulled out of the squad before the finals through injury. The CBF said on its official website www.cbf.com.br that a scan on the Manchester City player had confirmed a ligament injury in his left ankle that ruled him out of the tournament in Russia. Danilo had asked to remain with the squad and had already begun to have treatment on the injury, the CBF added. Brazil, who are favourites to lift the World Cup for a record sixth time, face Belgium at Kazan Arena on Friday.