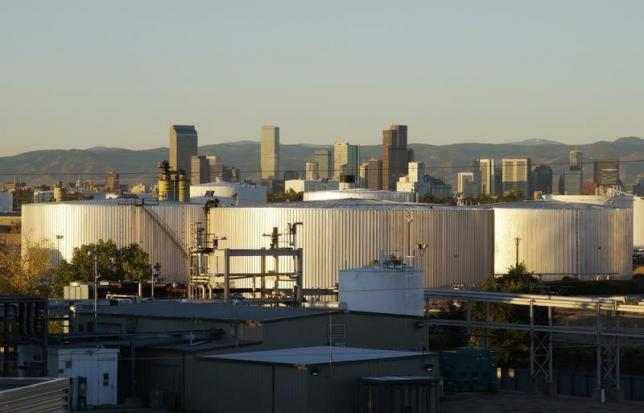 SINGAPORE - Brent crude oil prices fell over a dollar on Friday, ending a run of rallies earlier in the week, after OPEC said that its output surged in March, adding to a global glut. The Organization of the Petroleum Exporting Countries (OPEC) said that its March production jumped 810,000 barrels per day (bpd), to 30.79 bpd which is equivalent to a third of global supply. Front-month Brent crude futures LCOc1 were down a dollar, or 1.6 percent, at $62.98 per barrel at 10.25 p.m. EDT on Friday. U.S. crude CLc1 was down 81 cents at $55.90 a barrel. Reuters technical analyst Wang Tao said that Brent could fall further to slightly above $61.20 a barrel before finding market support. Dipping output from the United States and other rival producers due to oil prices halving since June last year, increased demand for OPEC's supplies, the organization said. "The strategy of OPEC to put pressure on the high-cost producers is working, but the individual members seem to have moved off that focus and are instead producing as much as they can," said Jamie Webster, analyst at IHS in Washington and an OPEC expert. OPEC's report may reinforce the perception that major producers are staking out market share ahead of a potential rise in Iranian exports following its framework accord with world powers over its nuclear program. Friday's price fall at least temporarily ended a rally that has seen Brent gain over 16 percent in value since the beginning of the month, triggered by Middle East conflict and a dip in U.S. oil production. Open interest in Brent futures, which represents the total number of open contracts, has risen by a third this year to a record 2 million contracts this week. Market analysts say that volume precedes price, implying that soaring open interest indicates a rally as more traders open up new long positions in anticipation of rising prices. So far this year, the link between open interest and oil prices is tight, with Brent up 37.3 percent versus an increase of almost 33 percent in its open interest. - Reuters