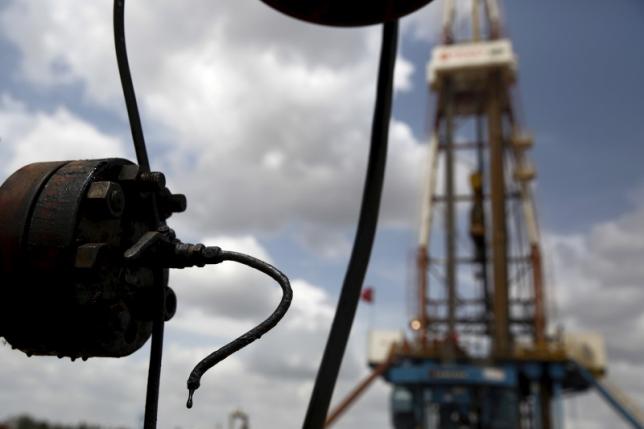 SINGAPORE - Brent oil futures climbed above $50 a barrel on Thursday for the first time in nearly seven months, boosted after US government figures showed a sharper-than-expected drawdown in crude stocks last week. Buoyant stock markets also supported prices, with the Dow Jones industrial average .DJI, the S&P 500 .SPX and the Nasdaq Composite .IXIC all climbing overnight. Brent LCOc1 had climbed 31 cents to $50.05 a barrel by 0225 GMT, its highest since Nov. 4. It ended the previous session up $1.13, or 2.3 percent. US crude futures CLc1 rose 23 cents to their strongest since Oct. 12 at $49.79 a barrel, after settling the last session 94 cents higher. "Certainly ($50) is a psychological barrier. There is a momentum, people will try and push it up over that," said Ric Spooner, chief market analyst at Sydney's CMC Markets. "(From a) practical point of view will there or will there not be a sustainable increase above $50? At the $50-$55 range there has got to be a good chance of seeing the peak." He added that the world was still oversupplied with oil even with increased demand and supply disruptions from Canadian wildfires and violence in Libya and Nigeria. US crude stocks fell 4.2 million barrels to 537.1 million in the week to May 20, the steepest weekly drop in seven weeks, the US Department of Energy's Energy Information Administration said on Wednesday. That was larger than analyst expectations of a 2.5 million-barrel fall, but not as much as the 5.1 million expected by trade group, the American Petroleum Institute. Gasoline stocks rose 2 million barrels to 240.1 million barrels against forecasts of a 1.1 million-barrel drop, the EIA said. Stockpiles of distillates, which include diesel and heating oil, declined by 1.3 million barrels to 150.9 million, according to the EIA. Crude oil imports fell 4.7 percent to 7.3 million barrels per day last week, the EIA said. Meanwhile, BMI Research said in a report on Thursday that Indonesia, Malaysia and Vietnam would turn into net crude importers over the next five years as they, together with Brunei and Cambodia, add 500,000 barrels per day (b/d) of refining capacity over the next decade. -Reuters