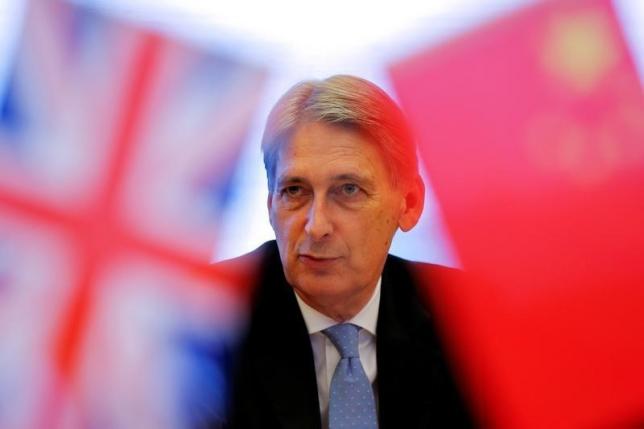 LONDON – Britain could borrow nearly 65 billion pounds more than planned in the next couple of years as new Chancellor Philip Hammond seeks to 'reset' government budget policy to ease the shock of last month's vote to leave the European Union. Ratings agencies and economists widely expect borrowing to rise materially next year for the first time since 2010, as Hammond has to call time - temporarily - on the austerity which dominated his predecessor George Osborne's six years in office. After taking office two weeks ago, Hammond said the darker post-Brexit outlook meant policies the Conservative government had pursued since 2010 needed to change - and economists are now starting to put numbers on what this might mean. Hammond told reporters on Sunday the scale of any stimulus would hinge on how rapidly the economy was slowing by the time of the Autumn Statement, the half-yearly budget update that usually comes in late November or early December. "There is going to need to be a rethink," said Paul Johnson, director of the Institute for Fiscal Studies, a non-partisan think-tank which scrutinises the public finances. Just sticking with the plans Osborne set out in March means borrowing is likely to overshoot its target by tens of billions of pounds as tax revenues fall and spending on social security for the low-paid and unemployed rises, Johnson said. Several economists - working partly off rules of thumb from Britain's budget watchdog - estimate on average that borrowing this tax year and next combined will be almost 65 billion pounds above forecast, even if the economy dodges recession. They did not forecast further out because of uncertainty over the economy and the government's budget plans. Total public borrowing in 2015/16 was 75 billion pounds - a hefty 4 percent of GDP. The Office for Budget Responsibility forecast in March it would drop to 55.5 billion pounds this year and 38.8 billion in 2017/18. By contrast, Sam Hill, an economist at Royal Bank of Canada, expects weaker growth alone will stop borrowing falling this year, and see it rise to 85 billion pounds next year - double March's forecast. "The numbers could get even bigger than that – and I think there's a good chance that they do," Hill said. Hammond has said the Bank of England will be the first public body to offer stimulus if needed - possibly as soon as its meeting next week - but there will be greater pressure than before on the finance ministry to act too. Unlike when Britain last entered recession in 2008, interest rates and government bond yields are already at a record low, limiting the Bank's scope to boost growth through rate cuts or quantitative easing. Bank of England policymaker Martin Weale said in an interview on Tuesday that even if the central bank cut rates next week, it would be unlikely to boost the economy before the end of the year. Britain's situation now has some parallels with Japan, where Prime Minister Shinzo Abe has ordered his government to take advantage of ultra-low interest rates to unveil a large spending package by the end of the month to spur investment. STIMULUS CHOICES If Hammond does offer more stimulus, he will have to choose how to spend it. Long-term public investment offers the biggest boost per pound spent, according to the OBR, giving three times the return of tax cuts, and 50 percent more than general public spending. Its main downside is that effective projects take more time than tax cuts or public-sector pay rises, which immediately put more money in Britons' pockets. But Johnson and Hill say the case for investment is stronger than in a normal short-lived downturn, as uncertainty about Britain's EU relations could weigh on the economy for years due to the likely length of exit negotiations. Public investment has also been squeezed, dropping to 34 billion pounds last year from 51 billion in 2009/10. In March, the government listed 425 billion pounds of investment projects which needed private involvement, ranging from offshore wind farms to high-speed rail links. If a more immediate boost was needed, tax measures which rewarded business investment would be a better option than repeating 2009's temporary cut in value-added tax, as business spending appears weaker than consumer sentiment. NEW RULE, OLD RULE There is no sense that Hammond or the finance ministry have a fixed figure in mind for how much borrowing would be too much. Earlier this month, he said the low cost of borrowing meant it had "great attractions" to fund investment, but that Britain needed to be careful about the signal it gave financial markets. Last week he told parliament he wanted a clear framework to achieve "fiscal balance" in a reasonable time frame. Hammond may be tempted to revert to the rule Osborne devised in 2010, which gave him a reputation as a fiscal hawk but in practise allowed lots of back-sliding when the recovery faltered in 2011 and 2012. This rule was monitored by the OBR and required the government to target a budget surplus within five years. But this surplus did not include investment spending - an exemption Osborne made little use of - and also allowed adjustments for economic weakness annual extensions to the surplus deadline. This could give Hammond upwards of 40 billion pounds a year of discretionary spending to play with - equivalent to an annual stimulus of 2 percent - and still allow Hammond to claim to be as prudent as his predecessor, RBC's Hill said. "It's got the hallmarks of a political compromise which he might find appealing," Hill said. Markets were unlikely to baulk at funding a large British budget deficit at a time when even record-low gilt yields were much higher than those for Japanese and German debt, he added. Higher borrowing, however, could only be a temporary solution until the longer-run impact of leaving the EU became clear, the IFS's Johnson said. "If you borrow more now, you have to pay it back in the end. That will inevitably extend austerity – but with a break in the middle," he said. –Reuters