Brian Williams returns to television news on after suspension 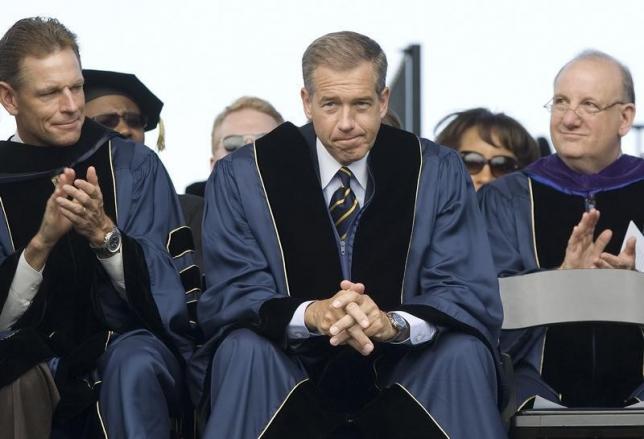 Brian Williams returns to television news on after suspension

NEW YORK – TV newsman Brian Williams, who was suspended for fabricating a story about being on a helicopter shot down in the Iraq war, returned to the air on Tuesday as a breaking news anchor on cable channel MSNBC to cover the pope's arrival in America. Williams, 56, lost his job as news anchor of NBC's flagship "Nightly News" program in June after an internal investigation established he had exaggerated various events involving his reporting from the field. "Good day, I'm Brian Williams at MSNBC headquarters here in New York," he said in the on-air introduction for his new role before launching into a preview of Pope Francis' first visit to the United States. Williams, who was the face of NBC News from 2004 until his suspension in February, is not expected to have a dedicated hour on the MSNBC schedule but will work on various breaking stories, according to media reports. Neither MSNBC nor Williams made any reference to his suspension when he began his coverage, about an hour before the pope arrived on a flight from Cuba. NBC and MSNBC are units of Comcast Corp. "We are building a network that has as its core value delivering breaking news better than anyone else. It is not about the anchor who happens to be delivering the news," Andrew Lack, chairman of NBC News and MSNBC, told the New York Times. "Brian will be such an important contribution to MSNBC's page-turn here," Lack said. In a June interview on NBC, Williams blamed his ego for the exaggerations and described his suspension as "torture." –Reuters