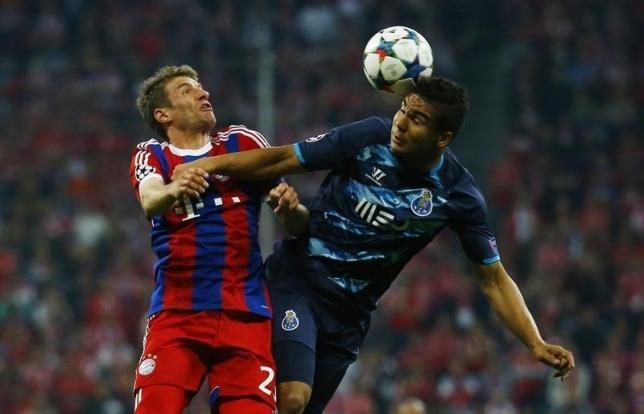 MUNICH - Majestic Bayern Munich destroyed Porto 6-1 to charge into the Champions League semi-finals 7-4 on aggregate on Tuesday and remain on track for a treble in Pep Guardiola's 100th competitive game in charge. The five-time European champions, who lost 3-1 in the first leg last week, showed no sign of nerves as they dismantled the hapless Portuguese with an impressive attacking display for a fourth straight last four spot. Reminiscent of Germany's 7-1 World Cup semi-final demolition of Brazil last year, Bayern scored three times in 13 minutes through Thiago Alcantara, Jerome Boateng and Robert Lewandowski, to wipe out their quarter-final, first leg deficit. "This is about life or death and I know how very important it was," Guardiola, who was under mounting pressure after their first leg defeat and the sudden departure of the club's long-time doctor told ZDF Television. "I know what is expected of me in this team. It is about winning just like at Barcelona. We played a different game. We knew Porto better after the first game. Now we have to fight otherwise we will not achieve what we set out to do." Two more goals before the break from Lewandowski and Thomas Mueller, who became Germany's record scorer in the competition with 27, and a late Xabi Alonso free-kick finished off Porto, who had Ivan Marcano sent off in the 87th for a second booking. Despite missing Arjen Robben, Franck Ribery and David Alaba among others, Bayern took the initiative from the start. The hosts, who have won all five home games in this season's competition, made their intentions clear early on when their Poland striker Lewandowski hit the post in the 10th minute. THREE HEADERS Spaniard Thiago made their dominance count four minutes later, heading in at the near post from a Juan Bernat cross to give them the lead on the night. With the home fans urging their team on, Jerome Boateng got the second in the 22nd, rising high to bury another header as the visitors' defence struggled to contain Bayern on the wings. Although a 2-0 scoreline would have been enough to send them through on away goals, Bayern did not let up and Lewandowski drilled home a header in the 27th as Bayern ripped Porto's rearguard to shreds. Mueller's deflected shot in the 36th made it 4-0 before Lewandowski grabbed his second four minutes later. Bayern took their foot off the gas after the break and Jackson Martinez pulled one back for the visitors in the 73rd before they were reduced to 10 men when Marcano got a second yellow card for a rash challenge on Thiago. Bayern put the icing on the cake with their sixth goal in the 88th minute as they preserved Spaniard Guardiola's impressive record of never having a team eliminated at the Champions League quarter-final stage. - Reuters