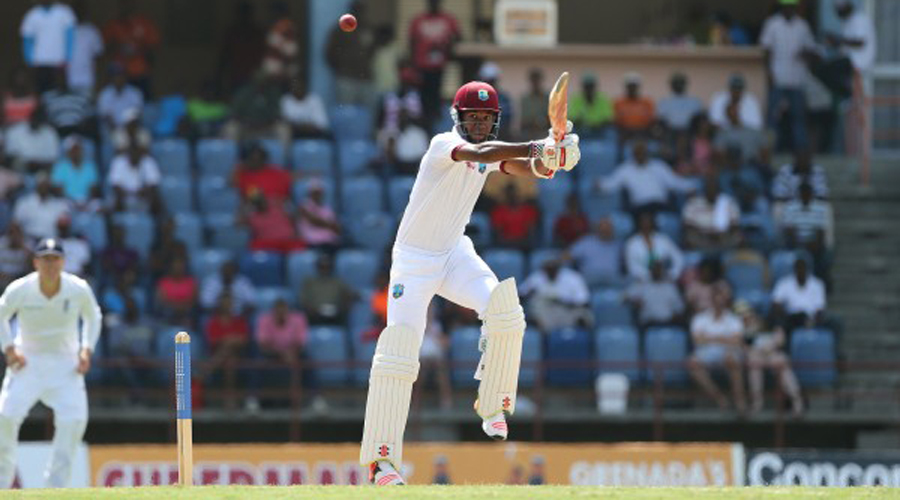 SHARJAH – West Indies reached 114-5 against Pakistan with inspirational opener Kraigg Brathwaite still at the crease after a tense fourth day ended early due to bad light as they chased a victory target of 153 in the third Test in Sharjah on Wednesday. Brathwaite was defiantly standing on 44 with Shane Dowrich on 36 leaving West Indies needing 39 runs to break a 14-match losing streak stretching back to last May last year. Pakistan began the day on 87-4 before a battling 91 by opener Azhar Ali and 42 for Safraz Ahmed looked to have steadied the ship. However, they lost their last five wickets for 33 to end on 208 with West Indies' captain Jason Holder claiming his first five-wicket Test haul. Roston Chase claimed the pick of the wickets in laughable circumstances. Having dived high to catch a Mohammad Amir drive over long-on, he realised he would step over the rope and released the ball back into play. Chase recovered so quickly that Amir, who had stood still admiring his shot, was unable to scramble home as Chase's accurate throw from the boundary ran him out. Their total of 208 left the visitors chasing a tempting 153 to end the tour on a positive note having lost the first two Tests. Opener Brathwaite, who carried his bat for an unbeaten 142 in the first innings, again looked assured on a flat, slow pitch while partner Leon Johnson was dropped twice as they reached tea on 23-0. However, Johnson went soon after for 12 and Darren Bravo quickly followed for three, both to Yasir Shah. Brathwaite, who has been on the field for every minute of the Test over four days, continued to play his shots but they then lost Marlon Samuels (10), Jermaine Blackwood (4) and Chase (2) with nerves beginning to show as they slipped to 67-5. Dowrich, who also batted impressively alongside Brathwaite in the first innings, settled their nerves, though, with a solid performance that included three boundaries and a six off a short delivery which he smashed over deep midwicket to leave his side within touching distance of a rare victory. West Indies are seeking their second Test win in two years - their only other success in 19 matches coming against England in Barbados in May 2015. SCOREBOARD