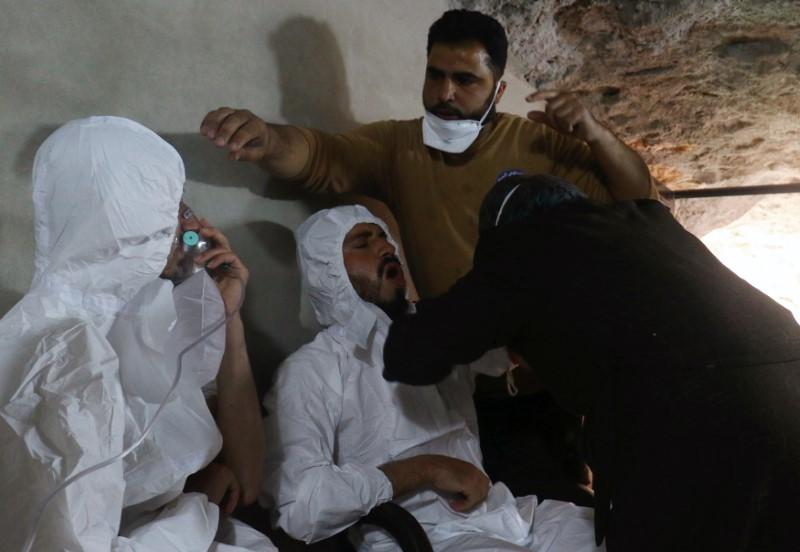 AMSTERDAM (Reuters) - Britain accused Russia on Thursday of carrying out a “thinly veiled political attack” against the head of the world’s chemical weapons watchdog, escalating a row over the body’s investigation into toxic attacks in Syria.

The comments, made during a session at the Hague-based Organisation for the Prohibition of Chemical Weapons (OPCW), were the latest sign of deep political division at the body over the Syrian conflict.

In an Oct. 26 report the U.N.-OPCW investigation team blamed the Syrian government for an April 4 attack using the banned nerve agent sarin in the opposition-held town of Khan Sheikhoun, killing around 80 people. The Syrian government has denied using chemical weapons and Moscow rejected the findings.

The mechanism was established in 2015 by the U.N. Security Council to identify individuals, organisations or governments responsible for chemical attacks in Syria. Its mandate expires on Nov. 17, but its work is incomplete.

Moscow is poised to veto efforts by Britain, France, Germany and the United States to extend the mandate.

A draft Russian-Iranian proposal circulated at the OPCW and seen by Reuters called for a new investigation, to be based on samples taken from the attack site. The Syrian government itself has already presented samples from the scene to the investigation team, which tested positive for sarin.

“It is a thinly veiled political attack on the professional integrity of the director general,” the British delegation said in a statement, referring to the OPCW’s outgoing Turkish head, Ahmet Uzumcu. “It seeks to undermine the capability and competence of the (OPCW).”

The Russian delegation at the OPCW could not be reached for comment. Syria joined the OPCW after a sarin attack on Aug. 21, 2013, killed hundreds of people in Ghouta, a district on the outskirts of Damascus. It has said it declared and destroyed all its chemical stockpile, but chemical attacks continue in the country’s civil war.