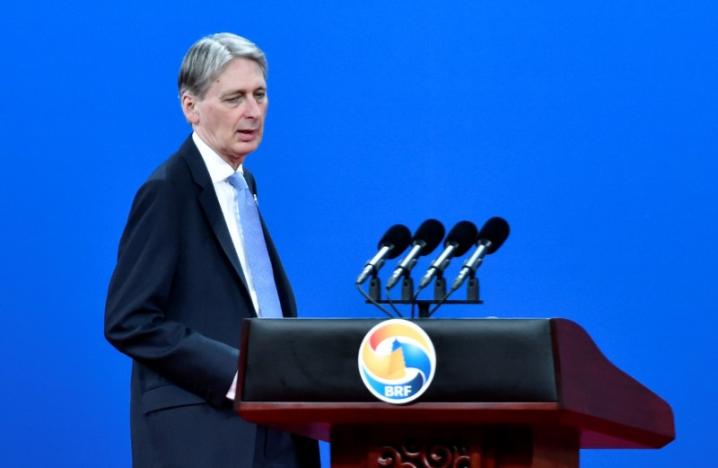 BEIJING - British Chancellor Philip Hammond said on Sunday Britain is a natural partner for China's new Silk Road programme, and as it leaves the European Union (EU) it wants more trade with the world not less.

China is one of the countries Britain hopes to sign a free trade agreement with once it leaves the EU, and London and Beijing have been keen to show that Britain's withdrawal from the bloc will not affect ties.

The two countries have in recent months announced closer cooperation in areas such as financial services as the British government prepares to negotiate its EU divorce.

Hammond offered strong support for what China formally calls the Belt and Road initiative, as he spoke at the opening of a summit on the plan in Beijing.

"It is my belief that Britain, lying at the western end of the Belt and Road, is a natural partner in this endeavour. Britain has for centuries been one of the strongest advocates on an open global trading system," he said.

Britain can be a natural partner in delivering infrastructure in Belt and Road countries by supporting the finance and planning needed, Hammond said.

"As China drives forward the Belt and Road initiative from the east, we in Britain are a natural partner in the west, standing ready to work with all Belt and Road partner countries to make a success of this initiative."

Britain wants to convince its trading partners that its decision to leave the EU does not mean it is against trade.

"As we embark on a new chapter in our history, as we leave the European Union, we want to maintain a close and open trading partnership with our European neighbours, and at the same time pursue our ambition to secure free trade agreements around the world with new partners and old allies alike," Hammond said. "Our ambition is for more trade, not less trade, and China clearly shares this ambition."

Britain's vote to leave the EU and the election of Donald Trump as US president last year have been two of the most obvious examples of growing unease in Western countries about globalisation.

Hammond said there had to be an acknowledgement that rapid change had unsettled many people. "As leaders, we have to respond to these concerns by continuing to seek new opportunities to expand trade but at the same time by ensuring that all our citizens are reaping the benefits that trade brings." -Reuters