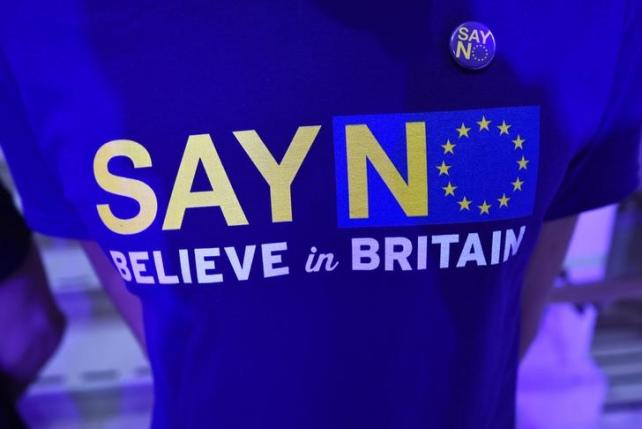 DONCASTER - Opponents of European Union on Friday rallied behind a group that will lead the campaign for Britain to ditch its membership in a referendum Prime Minister David Cameron has promised by the end of 2017. Though Cameron is unlikely to set out what concessions he has won from other EU leaders until at least late December, both supporters and opponents of British membership are trying to build campaigns, attract financing and select leaders. Cameron has said he is confident of being able to recommend Britain stays but he has also said he rules nothing out if he cannot get changes such as cutting benefits for EU migrants and safeguarding the interests of non-euro members like Britain. The Leave.EU group, backed by Eurosceptic millionaire Arron Banks, brings the anti-EU UK Independence Party together with the Democracy Movement, Global Britain and the Bruges Group. "We will win this," UKIP leader Nigel Farage said of the referendum at the party's conference in Doncaster, northern England. "We are together. We are united." Leave.EU has hired Washington-based firm Goddard Gunster, a veteran adviser on referendums, to advise on campaign strategy, Banks told Reuters. Most opinion polls show that Britons back staying in the EU, but views are volatile and there are some indications that perceptions could be shifting in response to the refugee crisis. One poll earlier this month showed a narrow majority in favour of leaving, though allies and investors have warned that leaving would torpedo Britain's global clout. Voters will be asked: "Should the United Kingdom remain a member of the European Union or leave the European Union?" The two possible answers would be: "remain a member of the European Union" and "leave the European Union". BREXIT? Cameron promised the EU referendum in 2013 after he came under pressure from some of his own Conservative lawmakers who feared the electoral success of UKIP, which won 12.6 percent of the vote in the May general election. German Chancellor Angela Merkel has said she wants Britain, the EU's second largest economy, to remain inside the club but campaigners on both sides have warned that no matter what deal Cameron brings back, he will face strong opposition from Eurosceptics at home. Banks, an entrepreneur who switched from the Conservatives to UKIP, said Cameron will fail to change Britain's relationship with the EU. "In business you don't negotiate by saying 'I like your car, I'm going to buy it and now can we talk about the price'. It is crazy, who would do that?" Banks told Reuters in an interview on the sidelines of the UKIP conference "It is not a proper negotiation because that is not how you do a negotiation. Always in business you should be prepared to walk away to get what you want at the end of the day." Banks said Leave.eu was signing up around 7,000 people a day and aims to attract 3 million supporters by the time of the vote, which he said could happen as early as March or April. "They don't want another summer like this," he said, adding that events such as the refugee crisis were helping move public opinion in favour of leaving. The main opposition Labour party is clear that Britain should stay in the European Union but believes the 28-member bloc should be reformed, its newly elected leader Jeremy Corbyn said last week. Most members of the business lobby group Confederation of British Industry also want reforms but believe the advantages of EU membership outweigh the disadvantages, its director-general John Cridland said on Wednesday. Farage, who some backers of the 'out' camp believe is too divisive a figure to lead the campaign, said UKIP would be playing a major role in Leave.EU, which plans to be a cross-party group. Banks said Farage would be one part of the campaign which he said would not have a “We don’t want it to be personality-based. He (Farage) will be one part of it but he is not the dominant part," Banks said. “It won’t be one person, it will be a group effort." -Reuters