British first as Crutchlow holds off Rossi in Australia 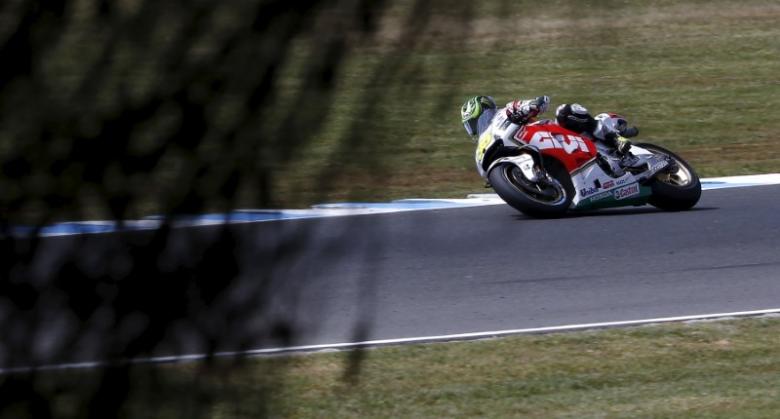 British first as Crutchlow holds off Rossi in Australia

Cal Crutchlow comfortably held off Valentino Rossi over 18 laps at Phillip Island on Sunday to claim his second career MotoGP victory and become the first British winner of the Australian Grand Prix. The 30-year-old, whose victory at Brno in August was the first in the premier class of grand prix racing for a British rider in 35 years, took full advantage after world champion Marc Marquez crashed out while leading the race. The LCR Honda rider held his nerve despite being chased by six-times world champion Rossi and crossed the line in 40 minutes, 48.543 seconds. Italian Rossi finished 4.218 seconds behind in 40:52.761. "I'm really pleased for my team, I was confident I could have won even with Marc in the race," said Crutchlow. "I look forward to the last two races and then we'll see what happens next season." Marquez, who sealed his third world title in Japan last weekend, led the race from pole until he misjudged his breaking point on the fourth turn of the ninth lap and ended up in the trackside gravel. With the rain that had disrupted his qualifying staying away, Rossi had stormed through the field from 15th on the grid into third place when Marquez crashed out, but was unable to close the 1.9 second gap on Crutchlow. "This morning we discovered we had good pace in good conditions," Rossi said. "I tried to get to Cal but he was too fast, too strong." Rossi's second place, ahead of Spanish Suzuki rider Maverick Vinales (40:53.852), helped him open up a 24-point gap on Yamaha team mate Jorge Lorenzo, who was sixth, in the race for second spot in the riders' standings behind Marquez. Marquez, who was looking for his sixth win of 2016, took full responsibility for his first failure to finish in 16 races this season. "I was taking a lot of risks trying to push from the beginning," he said. "It was completely my mistake, all season I was careful on the breaking points. "We must be happy because we won the title but we would have liked more wins." -Reuters